Cahill back with a winner through Boreen Boy 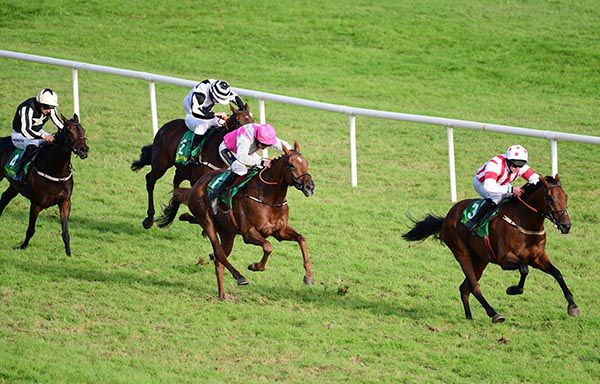 Boreen Boy styed on best to make a winning debut in the bumper at Listowel.

He certainly didn't go unbacked as the 33/1 shorted to 16s on the off.

His rivals came off the bridle straightening up and Boreen Boy began to increase his lead inside the final furlong.

He was pushed out to win by two lengths from Misty's Gift (16/5). Hey Johnny dropped two and a half lengths back to third.

Trainer Sean Cahill said: "He was working well but with a small yard you couldn't be sure. We were happy to come to a winners' bumper as we wouldn't get into a maiden bumper first time out here. When we had him right, we wanted to run.

"We said we'd give him one run in a bumper, he was entitled to that, and if it didn't work he would go over hurdles. He has schooled to the last and now we can go where we like although he is also for sale.

"I bred him myself and still have the breed of him at home. He is tough and nothing gets the better of him and will be a great fun horse."

He added: "The last winner we had was in 2012 and I got my licence back two weeks ago.

"I live in my home place at Thomastown, Co Kilkenny but we rent stables from Joe Canty at the Curragh and we've four horses.

"To be honest, anyone that couldn't train a horse from the Curragh, they're in the wrong game as the facilities are so good. You have everything at your hands and my nephew Joe Condon does most of the work so I'd like to thank him.

"This is a good start and we're delighted."