Capuccimix makes all in Naas opener 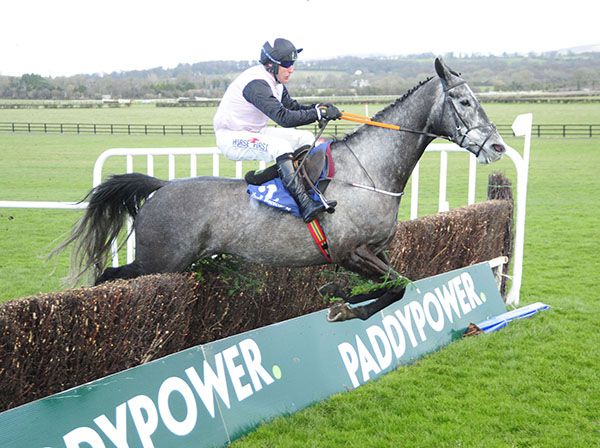 Capuccimix justified strong market confidence, as he made all in the opener at Naas this afternoon, the Enjoy The Cheltenham Festival With MansionBet Beginners Chase.

A winner of a maiden hurdle at Clonmel last year, the Henry de Bromhead trained grey was second on his debut over fences at Navan in December and again filled the runner-up spot on his most recent outing at Gowran.

Available at 10/11 in early shows, the Robcour owned seven-year-old opened on-course at 8/13, before going off the clear market leader at 2/5.

In front throughout under Robbie Power, he had matters under control from the second last and despite an untidy jump at the final fence, he went on to score decisively by eleven lengths.

Quantatmental (20/1) came through to take second under Jonathan Moore for Gavin Cromwell, while Thegoaheadman (12/1) was a further four and three parts of a length back in third.

de Bromhead said afterwards: "I'm delighted and he did it really nicely. He was a bit disappointing and may have got a bit of a fright in Leopardstown (unseated at Christmas).

"It's great to see him back like that and Robbie was superb on him.

"He's still learning and is a big entity who needs holding together. Maybe we'll look at the novice handicap chase in Fairyhouse or something along those lines."

The Co Waterford handler went on to discuss some Cheltenham plans, adding: "We'll make a decision tomorrow about Chris's Dream for the Gold Cup. We'll get all the information together tomorrow and make a decision then. I'm going over this evening.

"Eight of our horses travelled over yesterday and they have all settled in last night.

"Honeysuckle seems good and the lads said she was in good form this morning."