Cecil makes all under Walsh for Brown 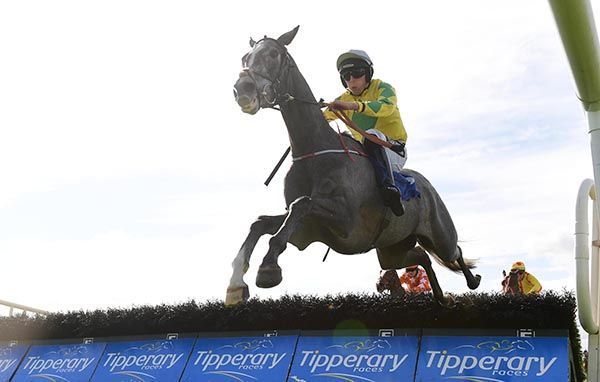 The Katy Brown trained Must Meet Cecil made all to take the opener at Tipperary this evening, the Tipperary Town 4yo Maiden Hurdle.

Having failed to make an impact on his first two starts, the son of Mustameet ran a fine race to finish sixth of twenty on his hurdles debut at Naas in March.

Sent straight to the front by Eoin Walsh, the grey gelding, who was bought for just E1,000 by owner Thomas Sheridan, soon established a healthy advantage.

His lead was reduced on the approach to the second last but he pulled out more when ridden, coming home two-and-a-quarter lengths to the good.

The well-backed Minella Youngy (14s in early shows, returned the 5/2 favourite) ran on well but ultimately had to settle for second under Luke Dempsey for Gavin Cromwell, while hurdling debutant Burren Song (4/1) was another two-and-a-half lengths back in third.

"We always thought he was a real nice horse from day one," Brown said.

"He ran a cracker in Naas first time over hurdles where he was a little bit green and he's really improved. He's very exciting.

"I couldn't see a whole pile of pace in the race today. He trains from the front at home and I said to Eoin if they are going to poodle then go ahead on him. I told him to ride him like a good horse and he came home like one.

"It's nice for Tom (Sheridan) as we won this race with Effernock Fizz in 2019 so it's nice to come back and win it again."

"He appreciates a little bit of dig in the ground so he'll be a nice horse for the winter as well. He's strengthening the whole time."

Nibiru kept on strongly under Gavin Ryan to run out an easy winner of the Fairyhouse Summer BBQ Rated Race at Fairyhouse.

Grizabella came from last to first when getting up close home to land the Fairyhouse Summer Season Claiming Race at Fairyhouse.

Hardwicke Stakes runner-up Mostahdaf is out to go one better in Thursday’s Princess of Wales’s Close Brothers Stakes at Newmarket.

Coventry Stakes runner-up Persian Force has the chance to enhance the Hannon family’s fine record in the Close Brothers July Stakes when he represents the Herridge Stables team at Newmarket’s July Festival on Thursday.