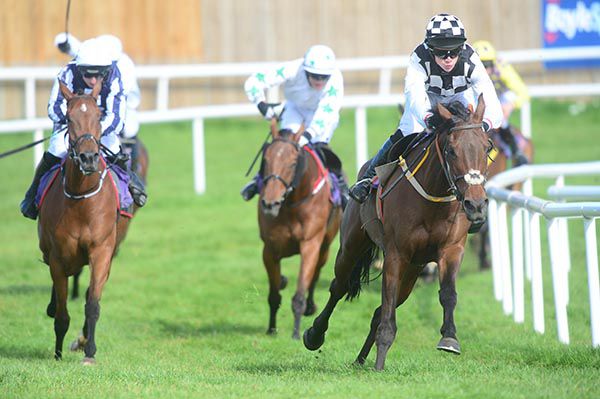 Grange Stud Cork stallion Getaway has been making the headlines in the sales ring lately and his daughter Celine Soprano was impressive in the concluding Racing Again June 5th INH Flat Race at Wexford.

For the Doneraile uncle and nephew team of Patrick and William Cronin, Celine Soprano put her experience to good use, always to the fore on the way to a thirteen length verdict over Whenurgoodurgood.

Cronin senior also bred Celine Soprano (4s into 3s) and he revealed: "She is named after the singer Celine Byrne. I saw her in the Opera House in Cork and she was absolutely brilliant. You wouldn't think I'd be a fan of Madam Butterfly!

"I only have three in at the moment, it's very hard to take on the big boys. We run Naturally Blond in Tipperary tomorrow."

He went on: "It's disappointing that she won't get the E5,000 bonus for winning today. She was qualified for it and all, but I can't understand why they won't give it to a mare who wins her maiden race against geldings.

"If it was a mares race she would have got the bonus. I wanted to come here because the ground was well-watered and I thought the two and a half miles would suit her.

"She might go for another bumper. There is a winners bumper in Listowel and another one in Galway. I'd love to have a runner in Galway. She jumps well but we are in no rush, so I might give her another crack at a bumper, we'll see."

William Cronin is also a godson of the winning trainer.

The Stewards interviewed Mr W.T. Cronin, rider of Celine Soprano, concerning his use of the whip in the latter stages of this race. Evidence was heard from the rider concerned. Having viewed a recording of the race and considered the evidence the Stewards found the rider in breach of Reg.10.3(c)(use of whip when race clearly won) and having taken his record into account cautioned him.

The Stewards interviewed Jarlath P.Fahey, trainer of Flying Crystal, concerning the conduct of this horse who refused to race. Having considered the horse's record in this regard the Stewards suspended Flying Crystal from racing for 28 days.