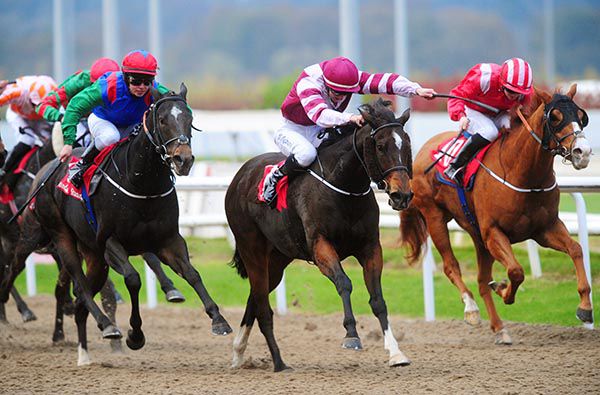 John Murphy and owner Thomas Keithley combined to take the Cesarewitch with Brazos at Navan earlier this month, and there were on the mark again this afternoon, as Aubineau made the breakthrough in the Christmas Party Nights At Dundalk Stadium Apprentice Handicap.

Third on her two previous efforts this month at Cork and Gowran respectively, the daughter of Holy Roman Emperor was sent off at 7/1.

Settled in second by Daniel Redmond, she took closer order approaching the straight, and improved to lead from the two furlong pole.

She was pressed over a furlong out by Gunmaker and Tyrconnell, but kept on well in the closing stages to score by three parts of a length.

The Gavin Cromwell trained Gunmaker (5/1) had to settle for second, while Tyrconnell, who was returned a 4/1 joint-favourite, was another half a length back in third.

Dandys Gold was the other joint-favourite (backed from 6s on-course), and she finished fourth.

"She's gutsy and she deserved that," said Redmond.

"She's been running well in defeat and bumped into one of Joseph's (O'Brien) the last day in Gowran and wasn't beaten far for second.

"She's in again Friday night and I think under a penalty she'd probably be worth keeping an eye on again.

"She loved the surface out there. I'm not too sure whether she sees out the mile and dropping back to seven might have been the key with her.

"John has done a good job keeping her sweet. His horses have been a bit hit and miss throughout the year, I suppose, but when he's had one ready he's done very well with it. The likes of Brazos who won a couple for him during the year and then went on to win a Cesarewitch - he kept him sweet.

"He's well able to do a very good job with the horses that he has and probably doesn't get the credit he deserves."

* The Irish Horseracing Regulatory Board Veterinary Officer examined Cracking Name, trained by David Marnane, at the request of the Stewards and reported the animal to be post race normal.

* B.M. Coen, rider of Smart Stinger (USA) trained by Andrew Slattery, reported to the Clerk of Scales that his mount ran flat and never travelled.

* The Irish Horseracing Regulatory Board Veterinary Officer examined Smart Stinger (USA), trained by Andrew Slattery, at the request of the Stewards and reported the animal to be showing signs that she may be in season post race.