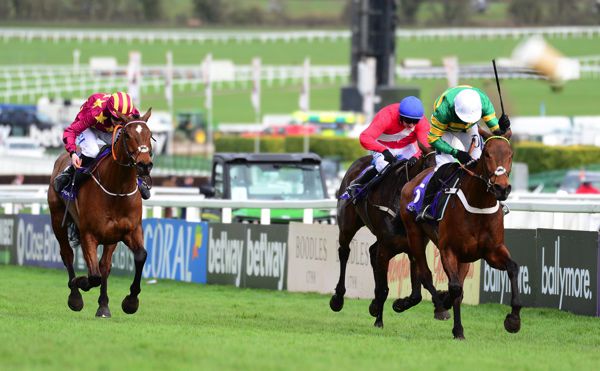 Champ and Santini give Nicky Henderson a strong hand in his bid for a third victory in the WellChild Cheltenham Gold Cup.

Long Run provided the Seven Barrows handler with his first taste of success in the blue riband in 2011, before the popular Bobs Worth repeated the feat two years later.

The shortest priced of his two runners this year is Champ, who is out to claim a second Festival victory following his memorable last-gasp effort in last year’s RSA Chase.

An autumn wind operation meant the JP McManus-owned gelding missed the first half of the season — and when he did return, he unconventionally ran over just two miles in the Game Spirit at Newbury, performing with huge credit to finish second to Sceau Royal.

“Champ had his wind done, which consequently put us on the back foot,” said Henderson.

“We were aiming for the Denman at Newbury, but when the meeting got put back a week, we came up with the wacky idea of running him over two miles in the Game Spirit. We just felt he was going to have an easier race over two miles rather than over three.

“I was hoping we’d see what we saw as my head was on the chopping block for this ridiculous idea if it didn’t work. Thankfully it went well and his jumping at that pace was exceptional. We all came away very happy and he has been fine since.”

The nine-year-old has been a little underwhelming in three starts so far this season, but better is expected on his return to Cheltenham in a first-time visor.

Henderson added: “The Cotswold Chase (at Cheltenham) was off. Sandown took it on, but the ground was desperate on the day. I was satisfied with how he ran and it put us where we wanted him.

“He ran a fantastic race in the Gold Cup last year and I see no reason why he won’t run well again.”

The latter was only narrowly denied by Champ at last year’s Festival and could hardly have made a more impressive start to this season in winning at Wexford and Navan.

However, he will return to Prestbury Park with something to prove, having fallen when favourite for the Savills Chase and finished only fourth behind Kemboy in last month’s Irish Gold Cup.

“Our plan with Minella Indo was to be busy with him up to Christmas because we thought he lacked experience. He had two great runs at the start, winning a Grade Three and a Grade Two at Wexford and Navan, when he was very impressive,” said De Bromhead.

“Then we went to the Savills and it was disappointing he fell. It wasn’t the plan to run him again before the Gold Cup, but obviously we couldn’t go off the back of a fall, so looking at all our options we plumped for the Irish Gold Cup and I thought he ran respectably.

“We were adamant he needed a clear round and we got that. Kemboy got away from us after a mistake, but he still ran well.”

Native River, who won an epic Gold Cup in 2018, is out to become the first horse since Kauto Star to regain the crown.

The popular Colin Tizzard-trained 11-year-old also finished third in 2017 and fourth in 2019, but missed out last year through injury.

Tizzard, who will hand over the licence to his son Joe in the coming weeks, said: “He’s beaten the better English chasers and he’s the top-rated chaser in England.

“He’s in cracking form. He’s a Gold Cup winner and a class horse and we know he stays three miles and two furlongs.”

Native River is joined by stablemate Lostintranslation, who was a close-up third in last year’s Gold Cup but has failed to recapture that form so far this term.

Tizzard added: “I wouldn’t dismiss Lostintranslation. He seems in absolutely great form — the best he’s been since I can remember.

“I’m sure you’re going to see him turning in as though he might win it, but as we’ve seen here before, horse have got to get up that hill.”

Connections deliberated long and hard as regards which race to go for with the Rich Ricci-owned Royale Pagaille, who is technically still a novice.

In the end they plumped for the Gold Cup, and jockey Charlie Deutsch is relishing the opportunity of a lifetime.

He said: “I’ve loved riding him this season. I was gutted to miss out on him at Haydock last time, but I’m just really happy to keep the ride on him. Numerically it has been my best season to date and it would be a nice touch if I could win this on top.

“I’m really lucky that I’ve had the support of Venetia and I’d like to think I’m doing my best to reward her as much as I can by riding her winners.”

He added: “You have to remember it was still a handicap he won last time. I think, like Venetia said, with the horses that finished in behind it was hard to know what sort of performance it was, but it was hard not to get excited by it as he won by a long way and quite easily.

“Like Venetia said, any of those good horses in the Gold Cup would have put in a similar performance at Haydock and Kempton.”