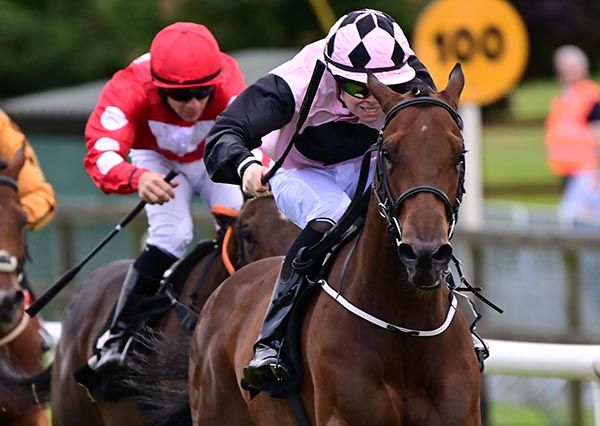 Tom McCourt doubled up at Bellewstown when Charming Lady finished well to take the Irish EBF Auction Series Maiden over an extended five furlongs in Bellewstown.

The complexion of the race changed when odds-on favourite Polar Bear was taken out before racing began due to the change in going to yielding.

Charming Lady who had finished a couple of places behind Polar Bear in sixth at Fairyhouse was ridden by 7lb-claimer Robert Whearty.

The pair were strong in the final furlong as they swept home to score by a length and a half from Hilltop Gold who was backed down to 13/2. Escaping Thejungle was another half a length back in third at 12/1.

McCourt said: "I gave her a chance in Fairyhouse but she ran with the choke out a little bit early on. She seems to have learned plenty from it. She was very professional for a track like this.

"She's a lovely filly and we've always thought a bit of her. She's big and you would imagine there is improvement in her.

"I just wanted to get that out of the way, I'm not going to over-race her.

"I was a bit worried this morning when I saw soft but I started going through pedigrees and Charm Spirit (sire) won on soft and heavy and the granddam of this one was a decent mare and won on soft.

"She'll definitely go on quick ground so you'd be hoping she would be versatile. She is pacey and she finished out well.

"Conor Maxwell rode her a lot of work early on and he said six or seven (furlongs) and that she is quick enough for six.

"These races are great prize money for these type of horses. She was a cheap buy and you get all the allowances."