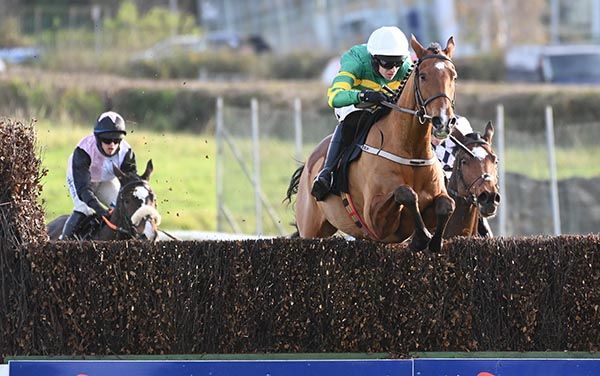 The 6/5 favourite, minus the headgear which he had worn on his previous six runs, sat a close second behind the pace-setting Dark Spark before moving to the front after the second-last. Market rival Crosshill (2/1) tried to close on the long run to the final fence but couldn’t land a blow as the winner scored readily by four and a half lengths.

Soviet Pimpernel (10/3), a little deliberate at the obstacles, was a further seven lengths away in third.

The JP McManus-owned gelding’s best effort over flights was probably when runner-up in the Betfair Handicap Hurdle at Newbury last year and he filled the same position in a valuable 2m4f contest at this year’s Punchestown Festival.

Frank Berry, racing manager for the winning owner, remarked: "He jumped away well, likes the ground and Mark was happy with him. He'll learn a little bit from it and will tip away for the winter.

"You'd have thought there was a big pot in him somewhere along the way over hurdles but it never materialised and you'd have to say he was disappointing on occasions.

"He was good over these and I'd say he is more a handicapper than for graded races. It was nice to get it out of the way."

The well-backed Alohamora got it done nicely from the front in the Bar One Racing Sign Up Bet 10 Get 50 Irish EBF Mares Handicap Chase at Fairyhouse.