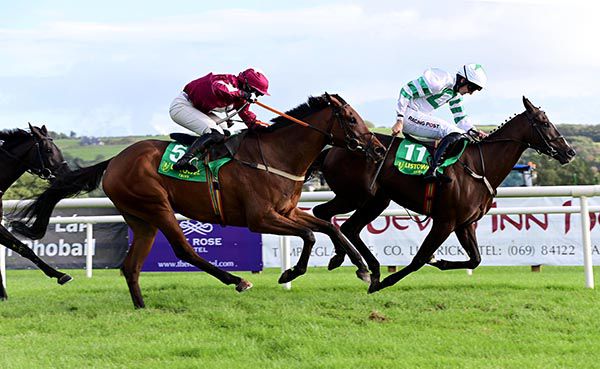 Tempo Chapter Two was sent to post a 8/11 shot to give Willie Mullins a four-timer and hit the lead over a furlong from home in the two-miler.

Maxine O'Sullivan got a good tune from Johnny Cigar in the closing stages, however, as the Shantaram gelding ran on strongly to pip his rival close home by a head.

The winner had been as big as 50/1 at one point this morning but attracted some support and went to post an 18/1 shot. He had run in four point-to-points, finishing fourth on two occasions.

"His owner Brendan Diamond is with me 25 years, I've had some placed horses for him, sent him a few and he bred this horse. I know it's a cliche at this stage but we always liked him,” said Limerick handler O'Donnell.

"I said to Maxine that he was very backward and obviously looking at his profile, we minded him, and were cautious, cautious.

“Brendan asked me if I could have him straight for his first run back, I said I'd have him 80%, and I'm not surprised he won.

"This a lovely feeling. I had never ridden or trained a winner here but obviously for southern people, Listowel is very important."