Coakley rides out his claim as Halford secures a treble 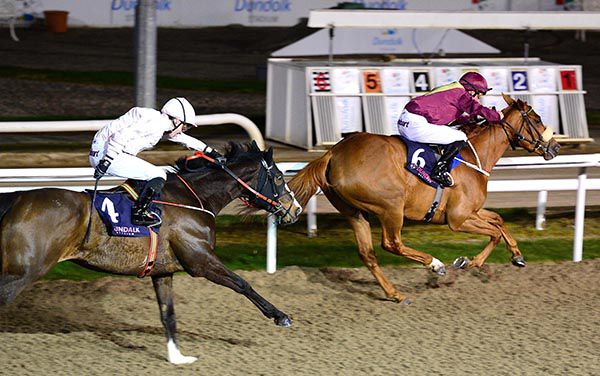 With his 95th winner Ross Coakley is now a fully fledged professional jockey after making it three on the night for Michael Halford at Dundalk, aboard Miss Snossyboots (5/2 into 2/1 favourite) in the Print Express Apprentice Handicap.

Given the race he was in, Coakley wasn't claiming his three pound allowance on this occasion, and for HRI Chairman Nicky Hartery he got it just right from the front aboard Miss Snossyboots.

Itsalonglongroad did well in second but was never going to get there, and Miss Snossyboots added to the gains of stable companions Luna's Luck and Sky Seven earlier, with a one length verdict.

“She's a very straight-forward filly and she loves being in front. She'd gallop her heart out for you,” said Halford.

“I'm delighted for Nicky Hartery, he's been patient with her, and it's nice that she's won.

“I'm delighted for Ross riding out his claim. He is with us a couple of days a week and he's a great help at home to us so I'm delighted to be able to give him his last winner as a claimer.

“It worked out well and we've had a good night, the horses are in good form.

G.C. O'Neill, rider of Dream Focus trained by J. S. Bolger, reported to the Clerk of Scales that his mount was crossed in the straight.

The Stewards received a report from Mr. P.L. Malone, Irish Horseracing Regulatory Board Clerk of the Scales, regarding the fact that G.C. O'Neill, rider of Dream Focus, weighed in at 1.1 lbs overweight.

Evidence was heard from the rider concerned, who stated that he drank some water after weighing out which may have pushed him over the limit on weighing-in.

Having considered the evidence, the Stewards were satisfied that the rider was in breach of Rule 231 and cautioned him.

S.M. Crosse gave his evidence in the presence of J.T. Gorman.

Having viewed the recording of the race and considered the evidence, the Stewards found S.M. Crosse in breach of Rule 214 by riding carelessly and having taken his record into account suspended him for three race days.

G.P. Brouder, rider of Tooreen Legend trained by E. J. O'Grady, reported to the Clerk of Scales that his mount felt lame turning in.

The Irish Horseracing Regulatory Board Veterinary Officer examined Tooreen Legend, trained by E. J. O'Grady, at the request of the Stewards and reported the animal to be post race normal.