Coen gets a good tune out of Bell Ex One 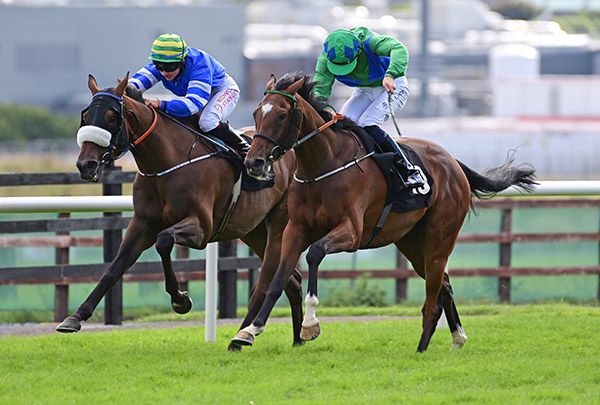 There have been some great finishes this week at Galway and the concluding second division of the Fr. Breen Memorial Handicap was another to add to that category as Bell Ex One (9/1) just got the verdict over a gallant Fallen Forest (28/1) by a short head.

The Excelebration gelding, making his second appearance of the week, laid down his challenge in the straight under Ben Coen as Fallen Forest (28/1) was making the best of his way home under Siobhan Rutledge.

Bell Ex One gained a narrow advantage inside the final furlong but his adversary rallied after being headed and it was on the bob of the heads at the line.

Coen, amongst the winners on Group 3 winner Ottoman Emperor at Goodwood this week, heard his number called by the judge and it was a second win of the season for his mount.

Winning trainer Ray Cody said: “As Ben said he'll never win by far. When he gets there he just does enough and pulls himself up. He's always been like that and you don't want to be getting there too soon with him.

“We're lucky we got the right verdict and I'm delighted as it was very close.

“I thought he ran very well here on Monday when he was sixth (to Citronnade) in a higher grade. I thought with this lower grade and getting the allowance for being a three-year-old he would be very competitive.

“Around here you need luck and I thought Ben was very good, he's a brilliant rider.

“When the ground gets a bit softer it'll suit him a lot better, that ground is as quick as he wants it.

“I'll have great fun with him, he's a fine big horse. We'll tip away on the Flat for the time being and he'll go hurdling later in the year.”