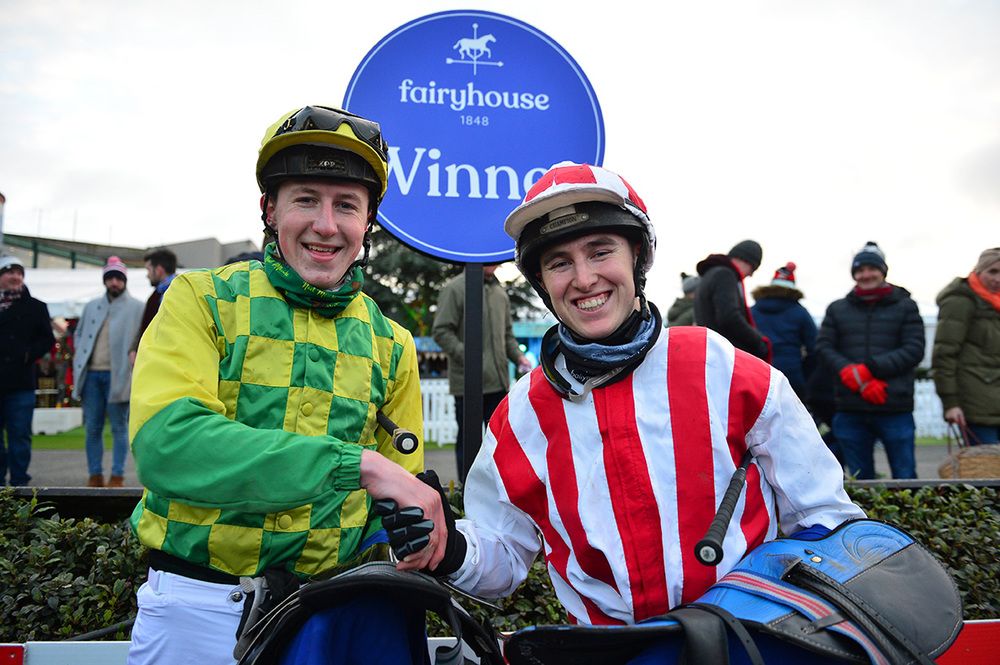 We lost Baba Buck’s in what looked like a nasty incident in the back straight and one couldn’t take their eyes off it in the straight either as there was plenty going on.

For David O’Brien and Harry Swan point-to-point winner Kilbunny Pontic didn’t enjoy a trouble free passage, whilst eventual fourth Realistic Optimism was hampered over a furlong out. Jockey of the third placer, Sa Fureur, Jamie Codd got a 5-day improper riding ban arising from this incident.

Post race and after lengthy deliberations with Royal Romeo and Kilbunny Pontic being led around still out on the track, the announcement came through that the judge couldn’t split Harry Swan and Pat Taaffe’s mounts.

Taaffe was adding to the gains on the afternoon for the Noel Meade team after their Drinmore success with the Denis O’Regan-partnered Beacon Edge.

Meade said afterwards: "I was delighted as I thought, on the line, we were beaten. It's gas because the two boys Pat (Taaffe) and Harry (Swan) are best pals, live together and are in college together.

"He ran well in the north and Pat was adamant the better ground would suit him but I wasn't so sure. It must have suited him though.

"I told him not to get there too soon on him and I'd say he was there time enough because if he was there any longer he would have been beaten."

"She is a lovely filly, we bought her in Fairyhouse for E2,200 and she won a point to point for Richard O'Hara. She had a good run in a point to point bumper when I thought she was left with a bit too much to do and she stayed on well.

"She is strengthening up the whole time and is turning out to be a good staying filly and Harry gave her a great ride. He said he'd have won easier only he got boxed in but that's racing.

"She jumps super and will make a nice hurdler. I knew she'd run well but was surprised she won with all the big guns up here and I'll settle for the dead-heat!"

The Stewards enquired into an incident in the straight involving Realistic Optimism, ridden by Mr T.P. Harney, placed fourth and Sa Fureur, ridden by Mr J.J. Codd, placed third, where it appeared Realistic Optimism ran short of room, clipped a heel and stumbled. Evidence was heard from the riders concerned. Mr. T.P. Harney stated that the horse on his outer caused him to get tight and he had to take a check. Mr. J.J. Codd stated that he was trying to make his way across to the rail and was not aware of the horse on his inner. Having viewed the recording of the race and considered the evidence, the Stewards were satisfied that Mr. J.J. Codd was in breach of Rule 214 in that he had ridden improperly and considering his record in this regard, they suspended him for 5 racedays. Mrs. T.K. Cooper did not attend this enquiry.

The Irish Horseracing Regulatory Board Veterinary Officer examined Data Breach (GB), trained by W.P. Mullins, at the request of the Stewards and reported the animal to be post race normal.