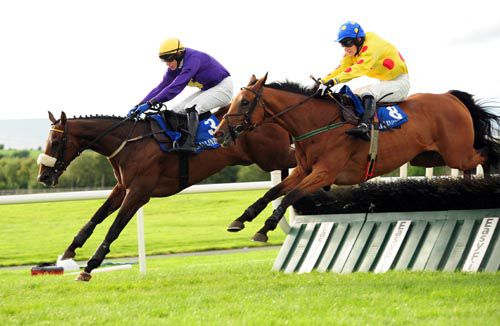 Font Of Wisdom ran out a comfortable winner of the Costello McDermott Maiden Hurdle on his first start over hurdles for his trainer Dermot Weld.

The 4yo son of Marju had just one win to his name after eight starts on the level and finished a well beaten ninth on his last run on the Thursday of Galway behind behind Saddler's Mark.

Ridden by Paul Townend this evening, he chased the leaders early on and was fifth at the halfway stage.

He made headway into second before two out and was ridden to lead approaching the final flight.

He kept on strongly on the run-in to go clear and record a comfortable five and a half-length success.

He was well backed from his opening show of 11/2 with Paddy Powers this morning and opened on track at just 4/1 before going off at 10/3.

The Philip Rothwell trained Decade Player had attempted to make all but just found the winner too good as he ran a cracker to finish second at 25/1 under Andrew Ring.

Russell was in fact unseat from Sizing Machine after the line and he has been stood down for the rest of the evening with a suspected shoulder injury.

Davy Condon will now ride Dysios in the 7:30 while Rob Jones will ride Mullane's Bridge in the 8.00.

Winning rider Paul Townend said afterwards: "He knew his job as they always do coming from Dermot Weld's yard.

"Jumping sweetened him up and he was fine on the ground as most horses are."