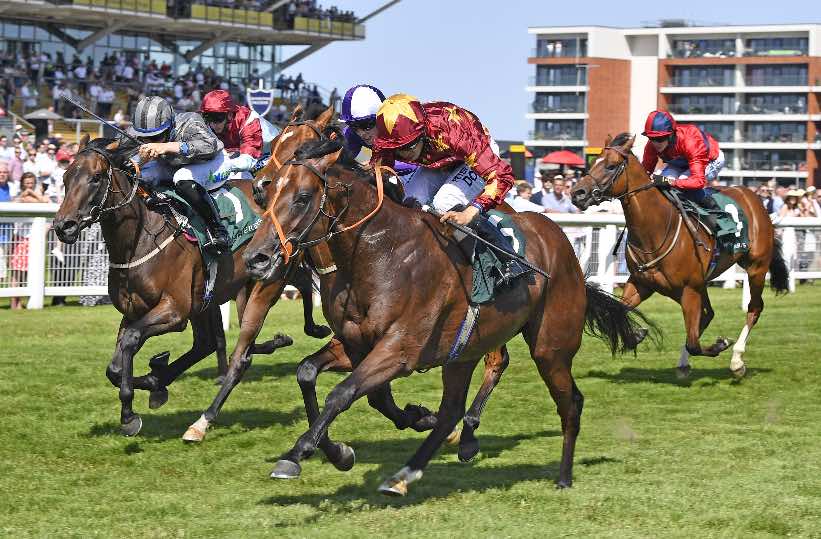 Dhabab gets a third opportunity to bid for Group-race honours in the Dubai Duty Free Mill Reef Stakes at Newbury on Saturday.

An impressive winner on his racecourse debut at Leicester in early June, John and Thady Gosden’s juvenile has since been sent off favourite for both the Coventry Stakes at Royal Ascot and the Superlative Stakes at Newmarket.

And while the son of No Nay Never came up short on both occasions, the form of his third-placed finish on the July Course could hardly have worked out better, particularly with the winner Native Trail following up in the Group One National Stakes at the Curragh last weekend.

Thady Gosden said: “The form of the Superlative has worked out very well, especially with Native Trail winning in Ireland the other day.

“He’s had a nice break since then and done well.

“He’s dropping back in trip, but he shows plenty of speed and showed a good turn of foot in the Superlative. I hope the drop back in trip shouldn’t be a problem.”

Richard Hannon has high hopes for Super Sprint winner Gubbass, who was last seen finishing fifth in the Prix Morny at Deauville.

He said: “He’s going on Saturday and we’re looking forward to it.

“Hopefully he goes there with a great chance. We’re very happy with him.”

The Kevin Ryan-trained Gis A Sub and Ed Bethell’s Fearby renew rivalry after finishing second and fourth respectively in the Gimcrack Stakes at York last month.

Bethell is hopeful his charge can turn that form around.

“Fearby has run some great races this season, and it’s all systems go for this weekend,” said the Middleham-based trainer.

“He’s in good form at home and I’m really looking forward to running him.

“His Sandown win was his standout run of the season in terms of speed figures. I think he would have been a lot closer in the Gimcrack at York, but seemed to have a few gaps close in front of him.

“A flat six furlongs at Newbury should play into his hands and show him at his best.”

William Haggas is represented by Maglev, who was runner-up to subsequent Doncaster sale race winner Harrow in a York nursery on his latest appearance.

Haggas said: “He’s doing well and obviously the form of his York run was given a nice boost by the winner at Doncaster.

“He’s certainly entitled to have a shot at a race like this, I would think.”