Condon's Lady has "a future at a level" 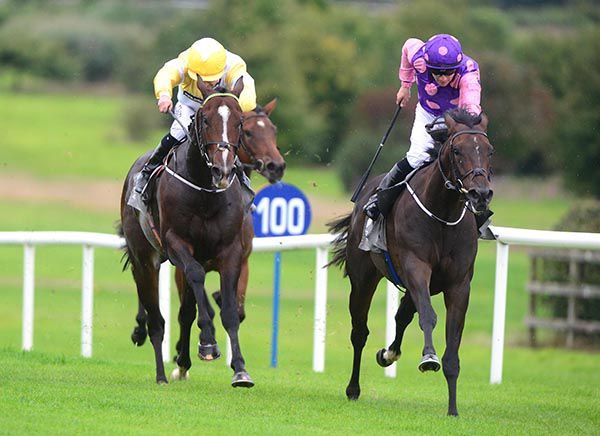 Market-movements weren't too revealing prior to the Foran Equine Irish EBF Auction Maiden (Plus 10 Race) at Navan as Lady Marengo (14s out to 16s) beat Chestnut Express (15/8 out to 4s).

The gambled-on That's Mad (8s into 9/2) blew his chance with a slow start whilst up front the Ken Condon-trained and Wayne Lordan-ridden Lady Marengo proved half a length superior to Chestnut Express with favourite Compton's Finale a length back in third.

"If you discounted her last run at Dundalk when she was beaten over 20 lengths and patently didn't take to the place at all she had a chance," said Condon.

"Her run at Tipperary was encouraging and the race has worked out quite well. The third won a nursery at the Curragh. It was a tidy contest and Niall (McCullagh) was happy with her on the day.

"If we could just trust that she'd get back to her Tipperary form we were giving her a chance.

"Wayne like her attitude and she seemed to relish the hill. When he gave her a few smacks she really saw the trip out well and I'd say seven furlongs will be no problem to her.

"She's a clean winded filly with a bit of size and scope so hopefully she has a little bit of a future at a level.

"A nursery might be next and we'll see what the handicapper makes of it. These Foran series races are great for the likes of her as she was a cheaply bought filly and she received a lot of allowances.

"We'll see where we are with her before the final of the series as it's a nice pot. I must find out the conditions but if she was entitled to more allowances I'd say why not. We'll see closer to the time.

"That was only her third start so hopefully there is a bit to come from her."

The Stewards requested a report from K.J. Condon, trainer, as to the apparent improvement in form of Lady Marengo, placed first, as compared with its most recent run.

K.J. Condon stated that his charge did not handle the all weather surface in Dundalk on her previous run, however today's conditions were more comparable with her first run in Tipperary where she ran well.

Having considered the evidence the Stewards noted the explanation offered.