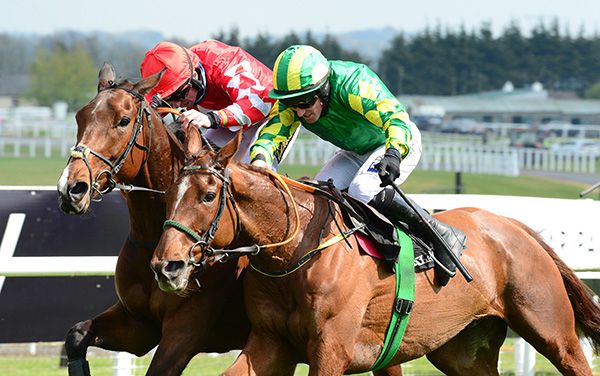 Hymie Weiss (near side) and Mylerstown Upper
© Photo Healy Racing

Jumping the second-last hurdle, Mylerstown Upper and Jamie Codd raced second, ahead of third-placed Hymie Weiss (under Sean Flanagan). However when Hymie Weiss poked through on the inside, Codd held his line, hemmed him in and then sent Mylerstown Upper to the front, and clear.

Codd kept Mylerstown Upper going on the run-in for an all-out nose 'win' as Hymie Weiss, which switched to the outer, finished strongest and narrowly 'failed'.

A Stewards' enquiry was called and while head-on and rear camera angles appeared inconclusive in determining whether any interference happened on the turning run-in, the result was amended and promoted the Noel Meade trained Hymie Weiss to winner.

For his part, and prior to the result of the enquiry, Cullentra Stables' representative Ian Amond had initially reported “Mylerstown Upper is a grand horse. We thought he'd win one of his bumpers and were a bit disappointed he didn't.

“He's gone and got the job done now and I'd say he'll probably have a break and come back in the autumn.

“He's a nice horse, he always worked well, and we thought he would have won a bumper but decided to kick on over hurdles and it's worked out now.”

The race has wider implications for the Amateur Jockeys' Championship with Mylerstown Upper's rider Jamie Codd losing his winner and remains locked with Patrick Mullins on 43 winners apiece, ahead of Punchestown next week.

Codd, separately, picked up a two-days suspension in the race, having chopped off weakening early leader Wrong Way Harry approaching the final flight, from which he saved inches in the tightly run race.