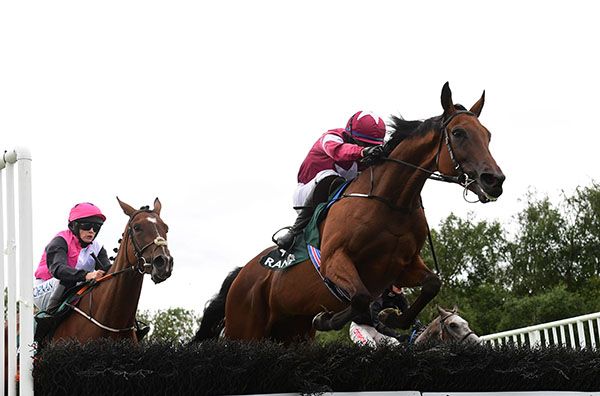 Bryan Cooper celebrated his 30th birthday in style, as he guided Uhtred to a comfortable victory in the feature at Downpatrick this afternoon, the Randox Health Rated Hurdle.

A dual bumper victor in 2019, winning the valuable Tattersalls Ireland Sales bumper and a Listed contest, the Joseph O'Brien trained seven-year-old was then out of action for some time.

He opened his account over flights at Naas last November but his recent form had been disappointing.

Sent off a 4/1 chance today, the son of Fame And Glory led early but was headed before the third and briefly appeared to be struggling when dropping to fifth at the fourth last flight.

Pushed along from two out, the Gigginstown owned victor, improved to lead before the final flight and kept on strongly up the run-in, coming home eight lengths to the good. Zarkareva (5/2) finished second under Rachael Blackmore for Henry de Bromhead, while Dollar Value (13/8 favourite) was another two-and-a-quarter lengths back in third.

The Danny Mullins ridden market leader was slow away but soon got the front and raced on the wide outside. Headed approaching the last, he soon faded.

"It was a stop/start race. I jumped out to be forward and jinked after the second, I thought 'what is he jinking at' but then I spotted Danny on the outside. I didn't know what it was," said Cooper.

"I was just trying to keep him in a rhythm, and together, because the undulations probably didn't really suit him around here. I just rode him as I found him.

"He's a classy individual on his day and I felt if he brought that forward here he'd run well.

"I wouldn't have read into his Cork run last time as it was a farce of a race, there were only three hurdles in the straight and he didn't jump any of them. It was his first run in a while and I knew he'd come forward.

"It was a nice performance and a nice confidence booster for him because he's got plenty of class and that will do him the world of good.

"I leave plans to Joseph, Michael and Eddie but there are plenty of those conditions races around where he might pay his way because he doesn't have a graded penalty.

"I'm sure the lads will steer him in the right direction, if they give me another go on him."

When asked what he was thinking when he saw Danny Mullins out wide he added:

"I just let him off to be honest. I had Jack and Rachael in front of me and I knew they'd take me to the dip.

"He picked up better than I thought, he had a good look at the last, and I thought it was a pleasing performance as he put it to bed fairly easy. He'll build on that."

D.E. Mullins, rider of Dollar Value (USA), trained by T.G.McCourt, reported to the Stewards' Secretaries that his mount was reluctant to jump off at the start of this race.