Cooper/Gigginstown double up with Respect 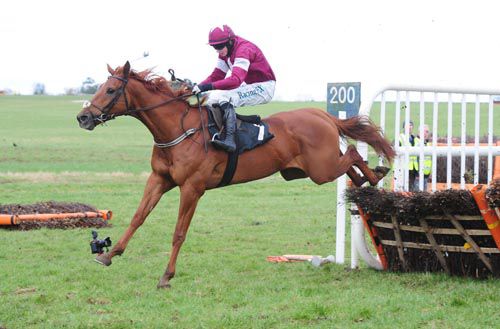 Bryan Cooper completed a quick-fire double in his retained Gigginstown colours as Road To Respect took the Cashel Maiden Hurdle at Thurles.

The 8/11 favourite made most of the running and generally jumped well in this 2m6f affair but needed to dig deep after a mistake at the final flight.

Inch Rise pinged that flight to give him a chance but the Eoin Griffin-trained gelding found more when driven right out by Cooper to score by a length.

Sizinguptheamazon could find no extra approaching the last, and was a further eight lengths back in third.

Cooper was successful on another odds-on chance, Burgas (4/6), in the previous two-mile maiden hurdle.

Road To Respect landed his only point-to-point start in fine style at Monksgrange, and was placed on all three previous hurdle outings including when runner-up to Yorkhill at Punchestown.

Griffin said, “That was grand to get it and I'm delighted but to be honest I didn't think at the start of the season that I'd be waiting until February to win a maiden hurdle win him.

"He is a nice horse for the future but is still a bit weak behind the saddle and we'll mind him for the rest of the season. He could run next in the 2m4f Grade 2 at Fairyhouse before then running at Punchestown.

"Bryan said to drop him in trip as he was a bit keen going slower over that trip."