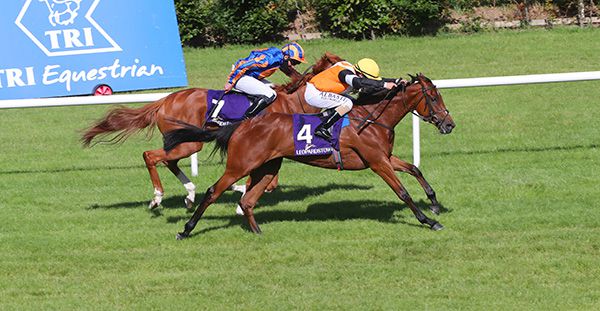 One Voice (near side)
© Photo Healy Racing

Yesterday's Coronation Stakes heroine Jessica Harrington was on the mark in the featured Group 3 Irish Stallion Farms EBF Blue Wind Stakes at Leopardstown today with One Voice as she combined for a double on the day with stable jockey Shane Foley.

Alpine Star's famous win under Frankie Dettori in yesterday's Group 1 race at Royal Ascot was the highlight of a memorable few weeks for Team Harrington and although jockey Foley was frustratingly forced to watch from Ireland due to lockdown restrictions, today he at least completed a double.

Foley won the opening maiden on Oodnadatta and having steered One Voice from near-last to first in scoring a half length win over Snow, moved to the 16 winner mark for the season, level with Seamie Heffernan at the head of the Jockeys' Championship.

Trainer Harrington herself cannot attend racemeetings being a 'cocooner', and following One Voice's win, her daughter Kate Harrington said “I think she deserved that after getting touched off by Silence Please the last day.

“She's a lovely filly. She's in the Kilboy Stakes and I'd say that will be her next target.

“He was meant to make the running and as Shane said it was plan Z. It worked out today, maybe that's the way to ride her and we were doing it wrong.

“Because he said he was going to make the running on her we actually put a soft rubber bit in her as she has a very light mouth.

“I'd say going down the back, when she was being keen, he was cursing me for doing that but it worked out.

“She has a real good attitude, she's a lovely progressive filly and will keep stepping forward. It's lovely to get a winner for Craig as that's the first horse we've had for him.”