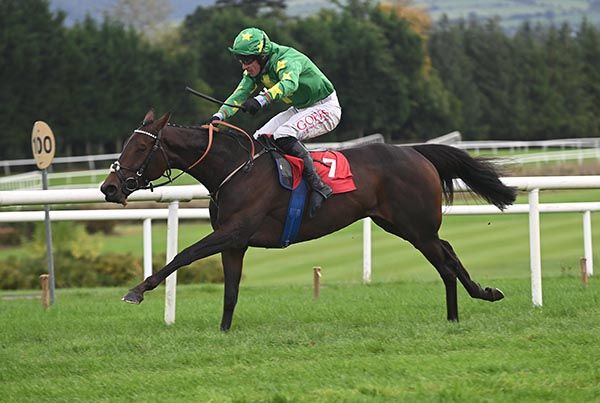 Troubled Times was prominent throughout under Derek O’Connor and stayed on best to win the Irish Stallion Farms EBF Mucklemeg Mares Flat Race.

O’Connor stuck to the inner all the way around and drove the Shirocco mare to the front over a furlong out. She was three and quarter lengths in front of Jetara at the line with Rockstown Girl a further three parts of a length back in third.

The winner had scored on debut at Killarney in May and was returning to bumpers for this Listed contest after finishing second over hurdles at Ballinrobe later in the summer.

Winning trainer Sam Curling said: That was lovely, it's been the plan since she got beat the last day.

“She's a lovely filly. They bred her (owner Willie Cleary) and it's massive that she's after getting black-type.

“Her bumper form worked out great and there were excuses the last couple of times.

“Derek was brilliant on her. He said he had walked it and saw a strip of ground down the inside. We don't tell him what to do!

“She'll go back over hurdles now. I'll try and win a maiden first and I won't over-race her, she's been on the go a good while.

“I'd say it was probably too sharp for her the last day and she needed the run the time before. We'll look for a two-and-a-half mile maiden somewhere.