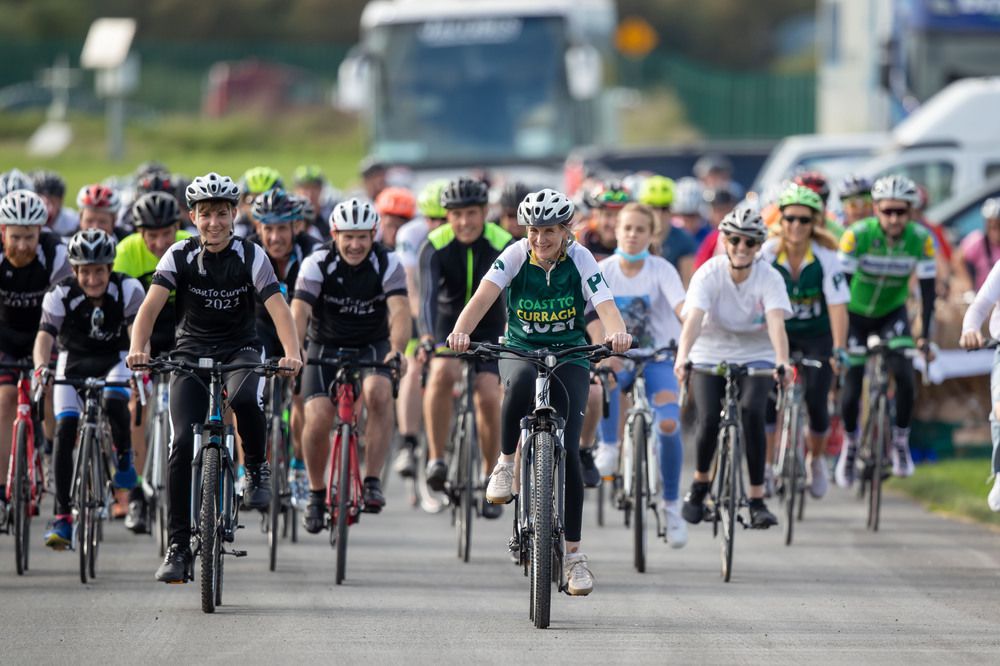 The Coast To Curragh will also take place on August 27th

Nine-time Irish champion jockey Pat Smullen will be forever associated with the Curragh Racecourse, not only for his outstanding riding ability and prolific career on the track but also for the incredible awareness campaign and fund-raising drive over Longines Irish Champions Weekend in 2019, which culminated in the Pat Smullen Champions Race for Cancer Trials Ireland.

Building on the positive relationship between the horse racing community and Cancer Trials Ireland, the Curragh will host the Pat Smullen Race Day in aid of Cancer Trials Ireland on Saturday August 27th. This unique event will include the second outing of the Coast to Curragh cycle, which starts at Laytown Racecourse at 8am taking in in seven racecourses and two stud farms in total, finishing at the winning line at the Curragh during the race meeting. The charity cycle will see racing legends AP McCoy, Barry Geraghty and Paul Carberry take part.

The special race day will include a special charity lunch and auction in aid of Cancer Trials Ireland featuring some outstanding items such as the original silks worn by Rachael Blackmore to win the 2022 Cheltenham Champion Hurdle and Gold Cup, a Cashel Palace racing royalty package, a racehorse ownership experience with Joseph O’Brien, Pat Smullen’s 2019 Champions Race memorabilia signed by all the jockeys who rode in the famous race and a VIP race and stay in Barberstown Castle.

In addition to racing, there will be meet and greet zone for racing fans to meet the jockeys, free children’s entertainment, live music and a delicious BBQ ensuring a great day out for all the family.

Cancer Trials Ireland will also be on hand offering advice and information on the services they provide. There will also be copies of Pat Smullen’s autobiography on sale, signed by Pat’s wife Frances and writer Donn McClean.

Brian Kavanagh, CEO of the Curragh Racecourse, said: "Pat Smullen is remembered every day here at the Curragh and we are honoured to have our Jockeys Room named after him. We are delighted to team up again with Frances, Gavin Lynch and support the team from Cancer Trials Ireland with their ongoing work in this important area. Our objective is that the Pat Smullen Race Day in aid of Cancer Trials Ireland will be an important event in our calendar every year to create a fun day for everyone while raising money for a very worthy cause."

Frances Smullen, commented: "The Coast To Curragh charity cycle was a huge success last year so to build on it with the race day and charity lunch at the Curragh on Saturday August 27th will be very special and a great day out. I know Pat would be thrilled that the important work of Cancer Trials Ireland continues to be promoted and highlighted. Our family are really honoured that the Curragh and Gavin Lynch, who organises the Coast To Curragh charity cycle, have come together to host this special race day in memory of Pat."

All monies raised from the cycle, charity auction, book sales and contributions from the public and the Curragh Racecourse will be donated to Cancer Trials Ireland, the leading cancer research trials organisation in Ireland.

There are small number of tickets for the charity lunch are still available for E200 per head and include a sumptuous four-course lunch in the Oaks Restaurant. Pat's good friend and Racing TV presenter, Fran Berry will act as MC and tipster.

Racegoers can avail of the Curragh August Summer Saturday bundle for E25 which includes admission, a race card, a BBQ burger voucher, and a E10 bet. (Must be purchased in advance online)

There is a complimentary shuttle bus service from Newbridge and Kildare Town.

Tickets are E15 online or E20 on race day. Those under 18 go free once accompanied by an adult.

To book a table at charity lunch in aid of Cancer Trials Ireland, please email Paul Keane on the Curragh team at [email protected]

To book tickets or for more information, please go to www.curragh.ie

To register for the Coast to Curragh Cycle, please visit www.coasttocurragh.ie

*Signed and framed A Plus Tard silks*

Sponsorship of a Grade 3 chase at Naas on Saturday November 12th. Kindly donated by Naas Racecourse.

Dinner, bed, and breakfast for two at the beautiful Barberstown Castle, the four-star country house and historic 13th century castle, followed by a helicopter trip for four to the Curragh Racecourse on Saturday, September 24th for the Goffs Million Smurfit Beresford Stakes Day. This also includes entry and lunch for four at the Curragh. Kindly sponsored by Barberstown Castle.

*Own a racehorse for a day*

A unique racehorse ownership experience with Joseph O'Brien including a visit to Joseph’s yard in Piltown, County Kilkenny. Kindly sponsored by Joseph O’Brien.

Four tickets to a premiership game to include accommodation. Kindly donated by Brentford FC.

A one-hour riding lesson each with racing legends, Barry Geraghty, Paul Carberry and Robbie Power, including tours of Gavin Cromwell's and Gordon Elliott’s yard. Kindly donated by all involved