Dee gets off the mark after making all 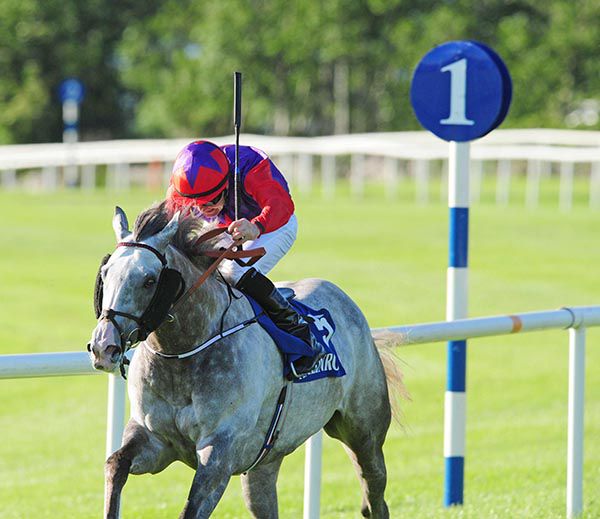 The Paul Deegan trained Time Dee made all to take the Irish Stallion Farms EBF Maiden.

Fourth on his first three starts, the grey son of Jukebox Jury was stepped up trip to a mile and five for the first time this evening.

He was also fitted with cheekpieces for the first time, and went off the 2/1 joint-favourite in the colours of owner Robert Ng.

Sent straight to the front by O'Donoghue, he was pressed by She's So Flawless from the four furlong pole.

He was pushed along and went on again with two furlongs left to race, keeping on well in the straight to score by a comfortable four lengths.

Squire's Tale ran on to take second under Ana O'Brien for her father Aidan at 4/1.

The Willie Mullins trained debutant She's So Flawless was the other joint-favourite, and she faded from the two furlong pole, eventually finishing third with Billy Lee in the saddle.

O'Donoghue said afterwards: "He was entitled to go and do that today, he had the experience over the other horses.

"Paul really liked him and said he had improved with every run. He thought he'd take a lot of beating and he was quite right.

"He'll stay very well, Jukebox Jury was a very good stayer. I don't think staying will be a problem to him but he's not short of toe either.

"He's run well in other maidens on softer ground and he handled conditions well."