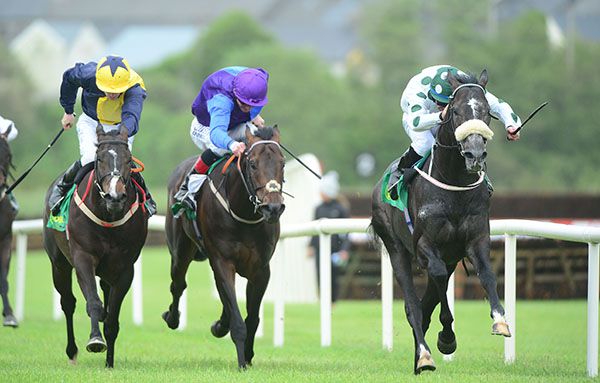 Defining Battle got off the mark on his third start, as he battled to victory in the BetVictor Guaranteed Run For Your Money Maiden.

Fifth on debut at Dundalk last November, the Mick Halford trained grey was since fourth at Cork behind Opening Verse in April.

He came in for plenty of market support on that occasion, and was well-backed again this afternoon, touching 9/4 this morning before going from 7/4 into clear 6/4 favouritism on-course.

Sent straight to the front by Rory Cleary, the Lope De Vega colt made virtually all.

He was ridden and pressed by Tham Luang from the two furlong pole, but had the measure of that rival inside the final furlong, before holding off the late surge of Rhydywn by a neck.

The runner-up ran a fine race on debut for Tom Hogan, and was returned at 6/1 having opened on-course at 9s.

The aforementioned Tham Luang was another length back in third, while the easy-to-back Tranchee (2/1) could only manage a disappointing fourth.

Cleary said afterwards: "Michael Halford said to keep it simple and he thought he was a good horse.

"He was only going through the motions coming into the straight but in fairness he did it the hard way as there is a strong head-wind."