Deserved success for Column Of Fire 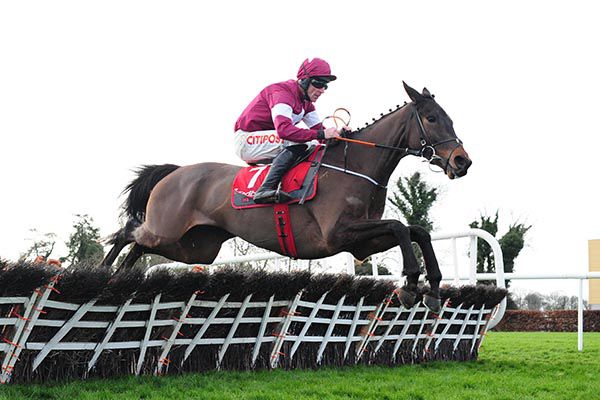 Goffs Land Rover Bumper second placer on debut in 2018, Column Of Fire (4/6 out to evens) shed his maiden tag over flights at the sixth attempt in the Ladbrokes Football 'Acca-Boosty' Maiden Hurdle at Punchestown.

A faller two out when there with every chance on New Year’s Day at Fairyhouse, the six-year-old put it all together beautifully on this occasion.

Column Of Fire tracked the leaders and he was fifth at the halfway stage.

He improved to challenge after three out and led approaching the next. Asserting from before the last, the Gordon Elliott-trained and Davy Russell-ridden victor easily accounted for Bois De Clamart by thirteen lengths.

Rebellito (5s into 3s) was pulled up by Paul Townend before two out, having had no extra to give from before the third last.

“He was unlucky the last day when he fell and ran a good race in Navan before that so it’s grand that he’s put his head in front," said Elliott on the Gigginstown House Stud-owned winner.

“We’ll try and find something small like a winners’ of one for him now. I’d say he’d stay any trip. He’s a nice laidback horse and will be a staying chaser down the line.”

A representative of Luke Comer, trainer of Aircraft Carrier, reported to the Stewards' Secretaries that their charge scoped wrong post race.

A.W. Short, rider of Bard Of Eirn trained by Edward Cawley, reported to the Clerk of Scales that his mount made a respiratory noise before being pulled up.

C.A. Landers, rider of Presenting Cody trained by Kieran Purcell, reported to the Clerk of Scales that his mount ran very free early in the race, tired at a later stage and was eased close to the finish.

P. Townend, rider of Rebellito (FR) trained by W.P. Mullins, reported to the Clerk of Scales that his mount never travelled during this race and made a respiratory noise before being pulled up.

The Irish Horseracing Regulatory Board Veterinary Officer examined Rebellito (FR), trained by W.P. Mullins, at the request of the Stewards and reported the animal to be post race normal.