Design off the mark with fine front-running performance 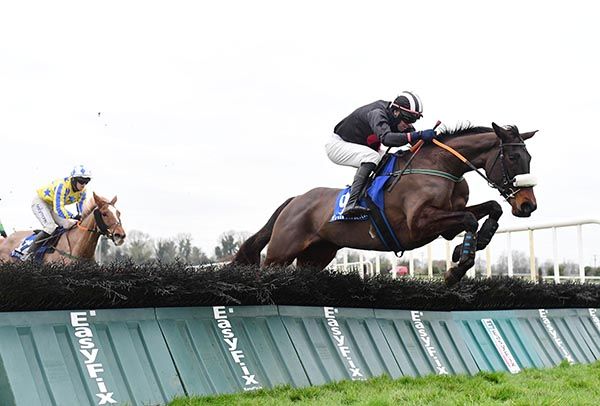 My Design proved tough in front to open her account in the mares maiden hurdle at Fairyhouse today.

The Shane O'Brien-trained filly made every yard in the two-and-a-half mile contest and found plenty for Ian Power in the closing stages.

She was asked for an effort turning for home and held her rivals at bay, repelling the late challenge of Hauturiere by three-parts-of-a-length.

The 7/2 winner had been placed on her previous two outings and was supplementing a point-to-point win in November 2020.

Power said afterwards:- “She got very excited in behind two runs back at Thurles and didn’t jump a hurdle so the last day we let her roll along at Navan and she relaxed.

“I knew today she would stay well so we used that. She banked the second last but otherwise she jumped good.

“We were a bit worried about the ground but she gave me a good feel going down to the start.

“Normally she would hang left near the end of a race but she didn’t do that today.

“She’s a decent enough type of mare and happier being out in front.”

Royal Kahala landed the spoils in the John Mulhern Galmoy Hurdle at Gowran Park this afternoon as hotpot Klassical Dream finished only fourth in the Grade 2 contest.

Glengouly off the mark for Mullins

Glengouly was sent off a solid favourite for the Red Mills EBF Ladies Auction Maiden Hurdle and survived a untidy leap at the second last to land the spoils.

Dettori on sidelines in Dubai after testing positive for Covid

Frankie Dettori will spend a short spell on the sidelines after testing positive for Covid-19.