Dicey late on but Waitin gets it done 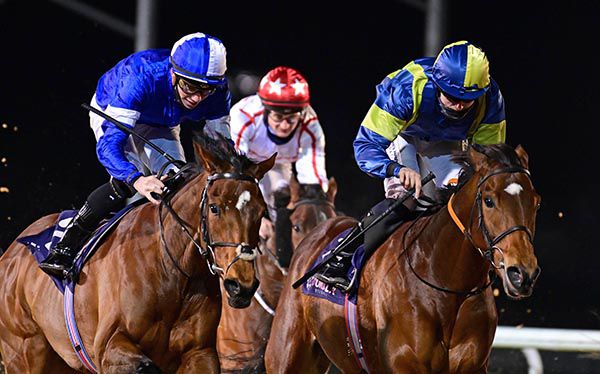 Evens into 8/11 on the show, Always Waitin justified the confidence of his backers in the Irish Stallion Farms EBF Median Auction Maiden at Dundalk.

The American-bred put his experience to good use to triumph for Willie McCreery and Billy Lee, but the 81-rated performer certainly had to work for his head verdict.

Indeed it was probably just as well for connections and backers of Always Waitin, that himself and Dicey Mo Chara momentarily came close together near the finish.

Promising first-timer Dicey Mo Chara lunged ‘at the death.’ He was just held though. The Adaay gelding seems a certain future maiden winner.

“He’s a grand horse and is owned by Barouche Stud outside Naas. I’m delighted for Barbara Facchino as I haven’t had a winner for her in a year,” said McCreery.

“He’s a big tall horse and a horse in the making. He’s going to grow into himself and Billy said he still feels a bit weak.

“We’ll give him all the time we can and he’ll be a lovely horse in those summer mile races. He loves good quick ground.”

The Stewards received a report from the Irish Horse Racing Regulatory Board Veterinary Officier, that Soonerthebetter, trained by Joseph Patrick O'Brien, was found to be a gelding and not a colt as shown on the passport presented. Having considered the report, the Stewards fined Joesph Patrick O'Brien €130, in accordance with the provisions of rule 148 (vi).