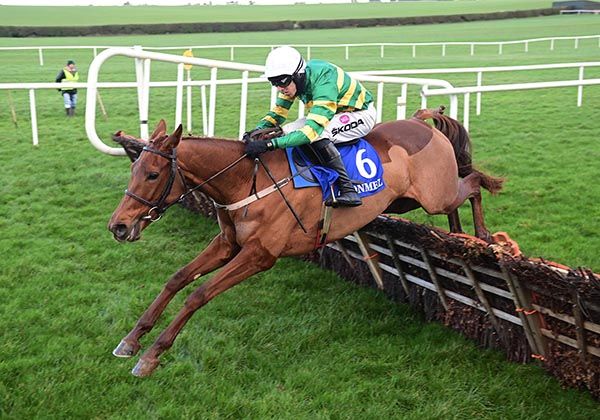 The market spoke loudly in favour of Dinoblue in the opening mares maiden hurdle at Clonmel and the French-bred filly made a very impressive debut for Willie Mullins and owner JP McManus.

Mark Walsh tracked the leader Glenbeg Express in the two-miler before letting the daughter of Doctor Dino move up to dispute at the halfway stage.

Some slick jumps up the back straight gave her the advantage but she was joined turning for home by stablemate La Prima Donna.

Walsh asked the even-money favourite (3/1 this morning) to stretch clear after the second last and she galloped on strongly, easing up close home for a 15-length success.

It was a clean sweep for Mullins in the race as La Prima Donna claimed the runner-up spot, four lengths clear of Mi Lighthouse.

Dinoblue is a half-sister to stablemate Blue Sari, who was second in the 2019 Cheltenham Bumper.

Walsh said afterwards:- "She is a lovely mare and did it very easily. She was very good and going by the stands Jack Foley's horse (Glenbeg Express) was hanging out and my one wanted to go on.

"She wasn't keen but she has a long stride and glided along the ground on the back straight. She jumped brilliant and was very professional the whole way.

"The ability is there definitely and I couldn't fault her on anything to be honest."

Royal Kahala landed the spoils in the John Mulhern Galmoy Hurdle at Gowran Park this afternoon as hotpot Klassical Dream finished only fourth in the Grade 2 contest.

Glengouly off the mark for Mullins

Glengouly was sent off a solid favourite for the Red Mills EBF Ladies Auction Maiden Hurdle and survived a untidy leap at the second last to land the spoils.