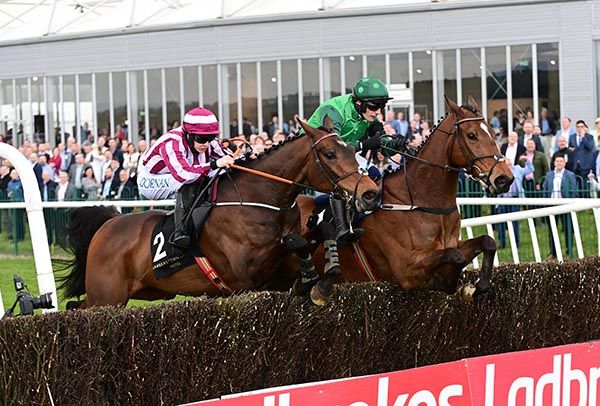 Third in the Arkle Chase at Cheltenham last month, the son of Blue Bresil was produced late by jockey Paul Townend, edging ahead of Coeur Sublime at the last and scoring a hard-fought head win over that rival.

Afterwards Mullins said “they quickened a bit about the fourth last and I thought Saint Sam was running a cracker until he genuflected at the second last. I couldn't believe how much Paul (Townend) pulled out of our fellow, I thought Coeur Sublime had stolen the race between the last two.

“Paul said he didn't want to appear in front too soon because at Leopardstown he looked all over the place and indeed he did that again today. Once he gets to the front he just thinks the race is over and he loses concentration. Paul timed it perfectly.”

“This is probably an easier track to see a race (than Cheltenham) out but I don't think going back to Cheltenham would be a problem. Paul is getting to know him better and the horse is improving and getting stronger.

“I thought he probably wants 2m4f next year and most of mine will probably start here in the John Durkan, it's a good race to start with.”

“He'll probably mix it between two and 2m4f - we'll give him a shot at going down the Champion Chase route but I think two-and-a-half might be better.”

It was jockey Townend's fifth Grade 1 success of the week, missing out on just Mullins' Facile Vega in yesterday's top-level bumper, confined to amateur riders.

Rossa Ryan has strong book of rides at Newmarket

Rossa Ryan has high hopes for his competitive book of rides as he heads into Newmarket’s July Meeting.

Tyros the target for Pearling Path

First-season trainer John O'Donoghue saddled his third winner of the season when Cailin Cliste scored at Fairyhouse last night and afterwards had news of his talented two-year-old Pearling Path.

Hugo Palmer’s Flaming Rib will bid to recoup a costly supplementary entry fee when he lines up in Saturday’s Group One Darley July Cup at Newmarket.