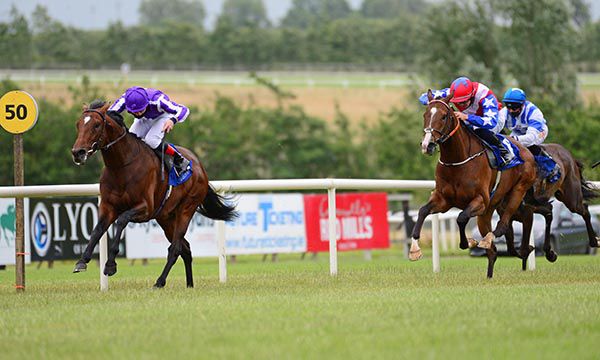 Unfortunate with Sherpa (pulled up injured) in the Irish Derby at the weekend, Donnacha O’Brien got off the mark for the season when 8/15 favourite Great House took the Patrickswell Maiden.

Also the first winner that the trainer has had on Turf, the Galileo colt had stayed on well when second over a shorter trip at Gowran.

Gavin Ryan (a double on the day after Hisnameis Mrdevitt at 33/1 earlier) had few doubts about his mount’s stamina and set out to try and make all the running.

The favourite was strongly pressed racing towards the final furlong but knuckled down well to his task to score by a length from Liquid Lunch.

The winner, unusually, was foaled very late in December (28th of the month) so this performance was all the more commendable against older rivals. Were Great House born four days later on January 1st, he could compete in three year old races and would also receive 9lbs (at the current 1m4f weight-for-age scale) from four year olds.

Winning trainer Donnacha O'Brien said: "He did it well and looked entitled to do that after his run at Gowran. It is nice to get a winner on turf.

"It is not easy for three year olds, especially if they are running from level weights against geldings, some which are ten. I think he is a decent horse.

"I might see that the handicapper does but I don't really want to run him in handicaps and could step him into Stakes class.

"Whether or not he can compete at Stakes level we will find out, but if he did turn out to be that level, he could go to Australia. I think if he could run as a three year old out there. He'd be on level weights with other three year olds and if he turned out to be that class, I'd think about something like that.

"I have never come across a horse born at that time of year and it's one of those things that he isn't a three year old, but he is a fun horse."