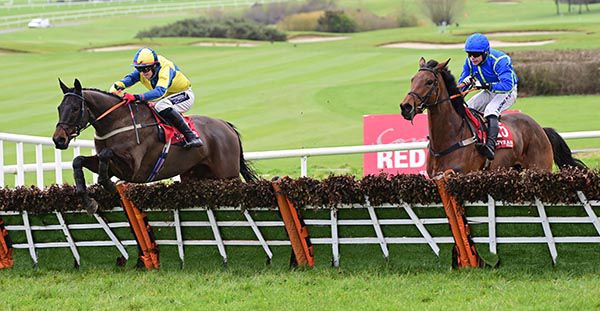 The likes of legendary names such as Arkle and Flyingbolt ensure the Dreaper name will always be linked with Thyestes Day, and Jim sent out the Peter Newell owned and bred six-year-old to get it done from the front under Keith Donoghue.

Dreaper and Donoghue combined for a recent success at Fairyhouse with Westy Fox, but this one didn’t look likely when eventual second Boghlone Honey briefly headed Forrard Away on the approach to the final flight.

She was soon threading water though, in very demanding conditions, and Limerick disappointment Forrard Away gamely kept up the gallop to win by three and three parts of a length.

Dreaper’s son Thomas said: “He is a lovely horse and we put a line through Limerick at Christmas because Limerick at Christmas can be hard on horses. We were willing to give him the benefit on the strength of his Fairyhouse run and were happy enough to go again and Keith decided to make the running.

"He was going to run in a beginners chase this weekend but we decided to come here and he'll jump a fence now.

"We haven't tried him on faster ground and I doubt we'll ask him for the foreseeable future - he'll be next year's horse."

The Irish Horseracing Regulatory Board Veterinary Officer examined Lost Oscar, trained by Peter Fahey, at the request of the Stewards and reported the animal to be post race normal.