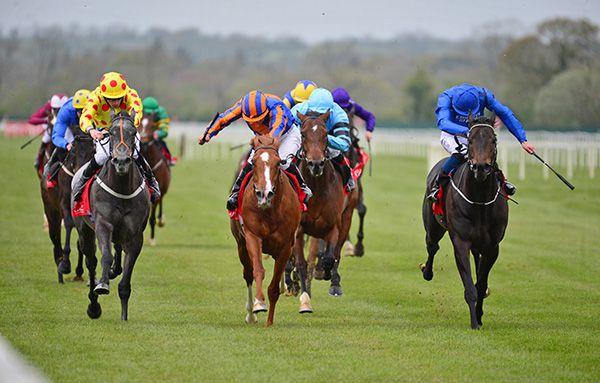 Closely related to Mark Of Esteem, winner of the 2000 Guineas in 1996 and a successful stallion, the Paddy Twomey trained grey was sent off a 3/1 chance (12s in early shows before many defections).

Settled behind the leaders on the inner, the son of Ajaya was caught in a pocket from early in the straight, eventually getting the desired room from the furlong pole.

Soon ridden in third, he stayed on strongly in the closing stages, just prevailing at the line by a nose.

The aforementioned Hms Seahorse (5/6f) had to settle for the runner-up berth, while Safecracker (7/1) was a close-up third, a further head away.

Twomey said in the aftermath: "He is the first horse I've trained for Louis Walshe, a lovely man who bred him and he is a very nice horse to get.

"He is well bred, I'm thrilled and was hoping he'd run a very good race - ours don't always win on debut.

"We had a bit of a line on Hms Seahorse through our Limerick winner (Corps Des Pages) who was third to him (at Leopardstown) and he would have been unlucky to lose.

"He is very straightforward, uncomplicated and I haven't thought past today. He is a versatile horse ground-wise."

G.M. Ryan, rider of Wicklow Silver trained by Mrs Prunella Dobbs, reported to the Clerk of Scales that his mount was slowly away from the stalls.