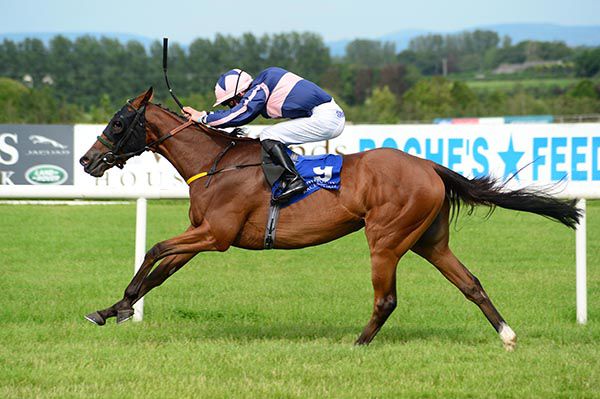 Dinard Rose bids to make the most of her light weight in the longest race of the Irish Flat season, the Ladbrokes Ulster Cesarewitch, at Down Royal today.

Twice a winner in July at Bellewstown and Limerick, Noel Meade’s three-year-old filly, partnered by talented claimer Andrew Slattery, promises to be well-suited by this extreme test and can thwart useful dual-purpose types Conron and Linger.

Most valuable event on the card is the Foran Equine Irish EBF Auction Maiden, and Dot Love’s Natural Power is fancied to confirm Galway placings with The Truant and collect for jockey Robbie Colgan.

Colgan partners John Murphy’s Cap D’Antibes in the Taylor Group Nursery, and the top-weight, dropping in class from Listed company, can fend off likely dangers Mogwli and Simply True.

Racing opens with the Irish Stallion Farms EBF 2-y-o Fillies Maiden where Schroders Mistake, after a respectable showing behind Love in the Group Three Silver Flash Stakes at Leopardstown, can open her account for Ken Condon and Niall McCullagh.

Johnny Murtagh’s Cruella Dovil, whose form includes a narrow defeat at the hands of subsequent Scurry Handicap winner Verhoyen, might get a deserved turn in the Irish EBF Supporting Irish Champions Weekend Maiden under Shane Foley.

Spruce Meadows caught the eye at Leopardstown recently and has good prospects in the Weatherbys General Studbook Handicap for John Feane and Ben Coen.

Gavin Cromwell enjoyed a double at Bellewstown on Thursday, and can continue his good run by sending out Tramore runner-up Aasleagh Fawn to take Division One of the Racing TV Handicap under Gary Carroll.

Malbas, meanwhile, will be hard to beat under a penalty in the second division of that extended mile-and-a-half event for Denis Hogan and Killian Leonard.

The Jim Bolger-trained Theophile gained a deserved win when sticking her head out in the closing stages to land the Sands Of Mali @Ballyhane Fillies Maiden at Fairyhouse.

With a rating of 63 it looked tough for Moonhall Girl in the Irish Stallion Farms EBF Claiming Race. The daughter of Make Believe didn’t know she was a 25/1 shot though, and delivered at Fairyhouse in the hands of Tom Madden.

125/1 winner delights some of the locals at Listowel

When favourite Defan took a nasty fall at the second, the Connolly’s RED MILLS Irish EBF Auction Maiden Hurdle was opened up. At 125/1 Le Figaro Faoudel was the one to grab the opportunity in race two at Listowel.

Felicidad won on her debut for the Gordon Elliott yard in the Irish Stallion Farms EBF Mares Maiden Hurdle at Listowel.