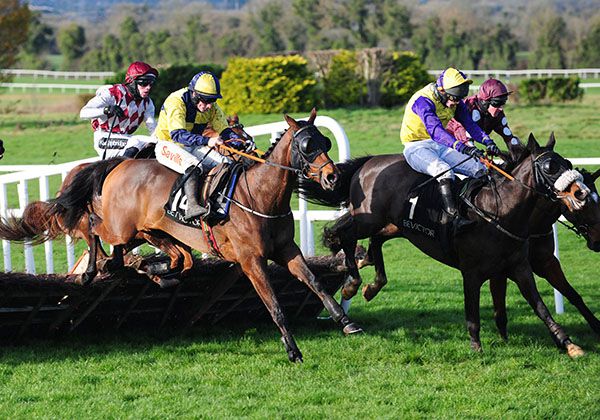 Dragon's Pass, near side, conjures up her winning move
© Photo Healy Racing

Dragon's Pass really hit her straps on the run-in to rocket home in the two and a half mile handicap hurdle at Navan.

There was an absolute stack of horses in with chances over the second last in this big field but it was strong-travelling Solar Heat who moved to the head of affairs.

Sean Flanagan began to get more than a tune out of Dragon's Pass in third on the run to the final flight and the pair stormed past Solar Heat in the final 100 yards.

The four-year-old filly's finishing burst was impressive as she she won going away by a healthy three and a quarter lengths at 10/1.

Trainer Denise Foster said: "That was a little bit unexpected. This is the first time she's gone that distance and it looks like she's crying out for it.

“She really tried out there, she likes that ground and now I know what trip to run her over.

“We'll keep her going over the winter now that we know she likes heavy ground.

“I'm delighted for the owners as they've been very good supporters of mine for many a year.

“Sean gave her a great and said she actually took him into the race which is great. She had a good few runs on the Flat to sharpen her up.

“She's a beautiful-looking mare and I'm delighted to get that for the Newells.”

This was a first career victory for Dragon's Pass on her 16th start (seven races on the flat and nine over hurdles).

A grand total of 54 horses have been entered for the €80,000 BARONERACING.COM Leinster National Handicap Chase at Naas Racecourse on March 14th.

Great White Shark was a late withdrawal from yesterday’s Grade 3 Quevega Mares Hurdle at Punchestown due to unsuitable ground conditions.

The weather is set to remain mostly dry for today’s meeting at Gowran and the going description is now soft to heavy (chase) and heavy (hurdles).

Having twice fallen foul of the weather in recent weeks, the Red Mills Chase card at Gowran Park finally takes place today with the fine spell since late last week having enabled the track to dry out sufficiently for a seven-race programme.