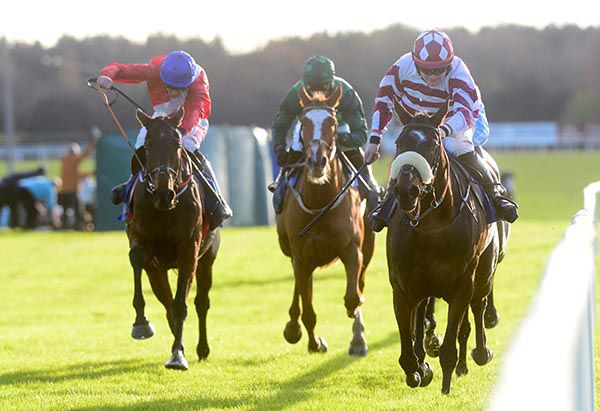 The mares maiden hurdle at Fairyhouse produced a remarkable finish with Larquebuse sprouting wings late on to get up and force a dead-heat with 40/1 shot Lunch In Adare at the line.

Concertista, runner-up in last season's mares novice hurdle at Cheltenham, was sent to post a 1/2 shot in the two-and-a-half mile contest.

She had to be driven along to challenge front-runner Telmesomethinggirl going to the second last, however, and the pair were soon joined by Lunch In Adare.

The later edged ahead as they bypassed the final flight and just when it looked like she had done enough Larquebuse made a late appearance on the scene.

Davy Russell's mount, who had been niggled along in a moderate fourth over the third last, picked up in some style in the closing stages and put her head level on the line to share the spoils.

“She’s won a bumper and maiden hurdle now so we won’t complain.”

Lunch In Adare was sent off a big price despite being placed in two bumpers and her trainer Peter Fahey said:-

Her form in bumpers was pretty good and I even tried her in a Graded bumper here one day. She’s a lovely filly going forward over hurdles, and when we up her in trip again it will suit her well.

“It was a good performance in her first run over hurdles. She jumps well and does everything right. She’s a nice filly to have in the yard, and hopefully she will continue to improve.

“I’m delighted for Padraic Ryan (owner/breeder) as it’s his first winner on the track.”