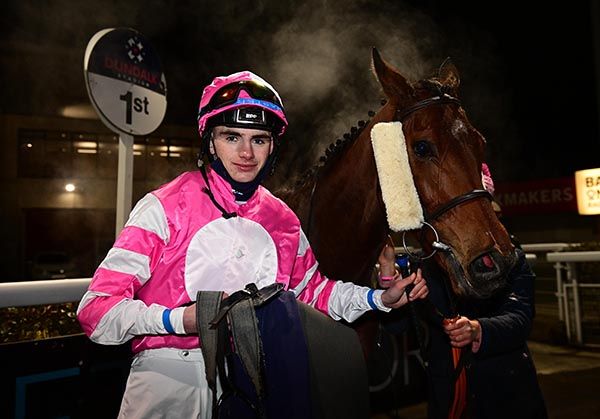 James Ryan was the second jockey to register a first success today at Dundalk, as the 17 year old partnered Philly's Hope to win the concluding Join On Instagram @dundalk_stadium Handicap (div II) for his employer trainer Tom McCourt.

The five year old daughter of Camacho was slowly into stride, raced in mid-division before progressing to challenge early in the home straight. In the closing stages, jockey Ryan showed strength and balance as he switched his whip twice and kept the the mare going to beat Miracles In May by two and three parts of a length.

A delighted Ryan later reported “I've just turned 17 and I'm from Oldtown in Co. Dublin. Hopefully I can get going now after that.

“That's unbelievable, it took time as I've had around 50 rides and Tom (McCourt) has been very good to me and it's great to get off the mark.

“She flew home, she ran well last week but just didn't get the clearest of runs. She got a lovely run up the inner today and flew home. I'm delighted.”