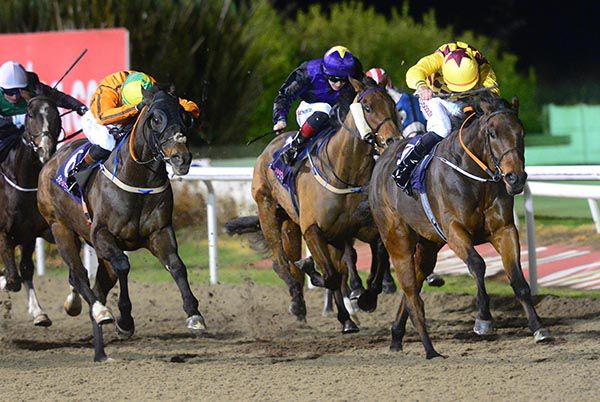 Tom Madden doubled up at Dundalk on board Everyhouronthehour in the nightcap and in the process rode out his 3lb claim.

There was plenty of market confidence behind the 11/4 favourite who battled his way to the front heading to the final furlong in division two of the mile handicap.

He was driven out in the closing stages to take the spoils by a neck from Red Avenger who was nearest at the finish at 10/1.

Dark Magic (14/1) completed the placings in third, a further length and a quarter adrift.

Tom Madden said: “I probably owe them that because I rode Six Of Hearts for Cecil Ross (uncle of owner/trainer William Ross) plenty of times and could never get to win on him.

“Hopefully getting his head in front will do him good.

“I’m delighted to ride out my claim as it’s a hard thing to do in Ireland. I’ve been at it a while but hopefully it’s onwards and upwards from here.

“My weight is good - I can do 8st6lb. I’m with Jessie every day of the week and they have a good team to go to war with next year.

“My agent Kevin O’Ryan works very hard for me and gets me plenty of rides. Dad and Niall (brother) are also very good to me. It was hard starting off but looking back now I owe them a lot.”

The Stewards enquired into an incident shortly after leaving stalls involving Munaajaat, ridden by D.P. McDonogh, placed Place, Chagall, ridden by R.P. Downey, and Irish Ambassador, ridden by W.M. Lordan, where it appeared the rider of Chagall failed to ride in a straight line prior to reaching the Marker Poles. Evidence was heard from the riders concerned. Having viewed the recording of the race and considered the evidence, the Stewards found R.P. Downey in breach of Rule 211 (Marker Poles) and having taken his record into account suspended him for one race day.