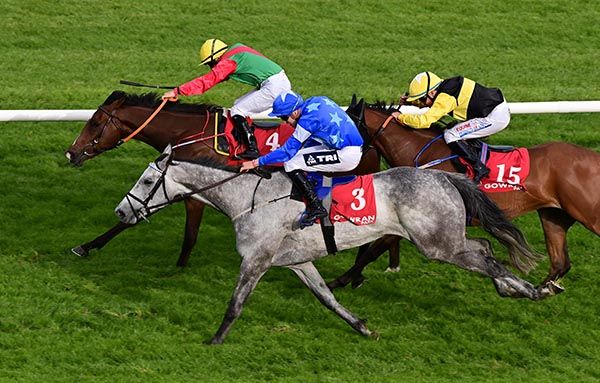 Natalia Lupini maintained her good form this season when Dunum delivered on his first start for her in the second split of Gowran Park's mile handicap.

He finished runner-up on three occasions last year for Patrick Turley so certainly wasn't winning out of turn.

Wayne Lordan had him positioned to strike in third at the halfway stage and the pair closed on Everylittlestep by the final furlong.

Dunum came home best once he grabbed the lead in the closing stages and beat off fast-finishing Lady Leanora (16/1) by a head. Everylittlestep dropped three parts of a length away to third. Hanbags N Gladrags, the 11/4 favourite, finished out of the places in fourth.

Lordan said: "The draw was a little bit of a worry, I was drawn 16 but the pace has been holding up tonight so I had to use him up a little bit to get a good position.

"He stuck at it well so it was a good performance. I saw one ear pricking so I thought he might have a little bit left.

"The second challenged me wide which was a little bit of a worry because I just thought he was having a look but he stuck at it well and won.

"He's a grand, straightforward horse. His form was consistent all last year. Hopefully he (handicapper) won't be too hard on him and there's another day in him somewhere along the road.

"Her (Lupini) horses are in great order and they are looking well. When they hit form, they are clicking for her."