Eilise's A Lady and a double winner 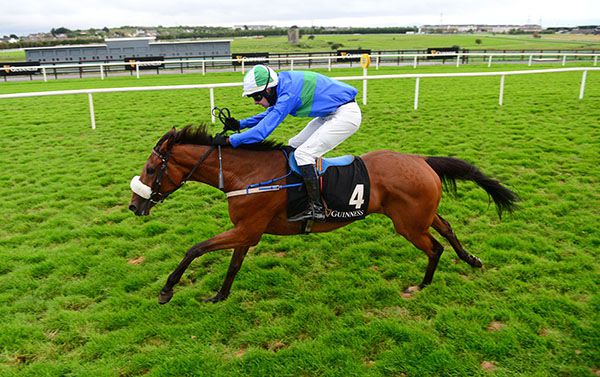 Eilise's A Lady made it two from two with a decisive victory in the concluding bumper at Galway.

She was pushed along by Aaron Fahey to take over from the 6/4 favourite Hallowed Star off the home bend, and soon had him in trouble.

The Shantou mare galloped on strongly to draw clear racing into the final furlong, and took the spoils by a comfortable six and a half lengths at 5/1.

Hallowed Star plugged on in second and finished four and a half lengths in front of Snegurochka (12/1) who did some good late work in third.

Trainer Paul Fahey said: "She is a fair mare, she isn't big but is all heart and she is very well bred. It is not surprising she could be a good mare because of the pedigree she has.

"I think we might put her by and go for the Listed bumper at Gowran in October.

"She is brilliant over hurdles and none of the family were any good until they went jumping. She'll be limited to hurdles but we'll settle for that!

"Aaron is 20 and has only ridden for me, but rides out for Jessica Harrington and if he could get outside rides he'd be delighted."

Eilise's A Lady had got off the mark on debut in Kilbeggan at 50/1 for father and son Paul and Aaron Fahey. It was Fahey Jnr's first winner.