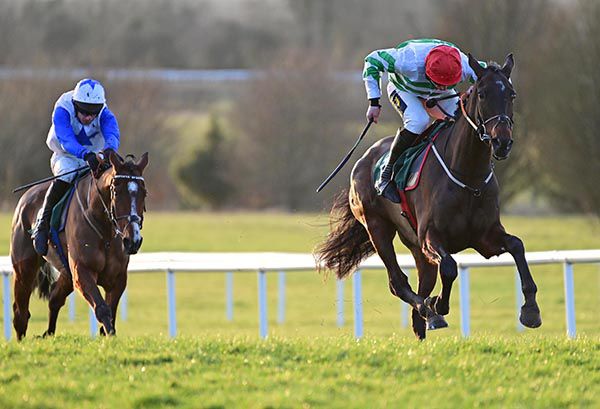 The son of Walk In The Park, was a €60,000 three year old purchase and having won his point-to-point on debut for Elliott and the Crocodile Pockets Syndicate last October, was sold to his new owners for €470,000 a week later at Tattersalls Cheltenham Sale.

Elliott, who trails Willie Mullins by €640,000 in the Trainers' Championship, had previously recorded a six-timer at the Co Meath venue on Troytown Day in November 2016 and, earlier today, notched winners with Coko Beach, Frontal Assault and Fierami.

Following his latest four-timer, the Gold Cup and Grand National winning trainer reported “he's a big chaser and that's what he was bought to be; he's a horse for the future.

“The problem is when they come with a big price tag there is always plenty of hype with them. He is a nice horse and we really like him.

“He really wants a jump, he's not really a bumper horse. Jamie said he was actually doing his best work at the line and said he doesn't need to do a lot more this year; he has done all the schooling with him and says he'll be a different horse when he gets a jump.

“We've had four winners and two seconds today so we can't complain.”