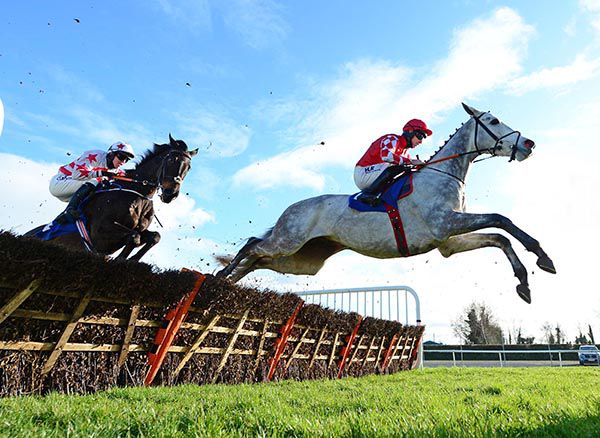 A 28/1 plus double for Gordon Elliott at Thurles was completed in the featured Grade Three Markaye Contracts Ltd Michael Purcell Memorial Novice Hurdle by Grand Paradis.

Jamie Codd rode the opening Cullentra House Stables victor, Jury Duty, in the hunter chase. It was Jack Kennedy that got the leg-up on Grand Paradis.

The successful grey is now 6/1 favourite from 10/1 with Paddy Power (non runner no bet) for the Martin Pipe Conditional Jockeys Handicap Hurdle at Cheltenham after his thirteen length demolition of Goodbye Someday.

Favourite Fighter Allen finished a length and a quarter back in third.

His hurdling wasn’t without flaw on the way round but it’s not surprising that Andrew and Gemma Brown’s youngster made a positive impression on Kennedy.

He said: “He has improved from his maiden hurdle win and I'm delighted.

"He is very good to jump, is a lovely horse and seems to have a good future ahead of him.

"He is a big chaser in the making and whatever he does over hurdles will be a bonus. He isn't a slow horse but will stay."

P.T. Enright, rider of Limestone Rock trained by M.F.Morris, reported to the Clerk of Scales that his mount never travelled and was pulled up.

The Irish Horseracing Regulatory Board Veterinary Officer examined Limestone Rock, trained by M.F.Morris, at the request of the Stewards and reported the animal to be coughing post race.

Walsh and McCurtin in hot water at Limerick

Trainer John Joe Walsh and rider Ambrose McCurtin were sanctioned by the Limerick stewards yesterday over the running and riding of Delightfantastic in the first division of the Crecora Mares Maiden Hurdle at the course.

Skyace in fine form ahead of Punchestown target

'Shark' Hanlon is pleased with Skyace as she prepares to step out of novice company at Punchestown next week.

Irish Grand National winner Freewheelin Dylan could turn out again at the Punchestown festival next week.