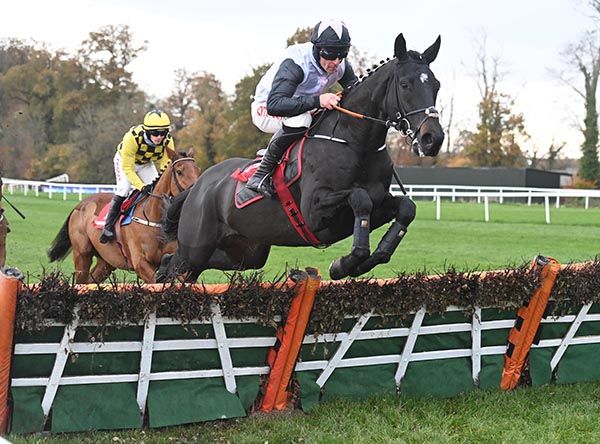 Gordon Elliott is keen to keep apart two of his smart second-season hurdlers, Teahupoo and Saint Felicien, for the time being.

Both four-year-olds are owned by Brian Acheson’s Robcour, and the pair of them look very promising.

Teahupoo was around in Ireland last season and while he was surprisingly beaten by Jeff Kidder at Easter, the winner went on to prove there was no disgrace in that at Punchestown.

“He has an entry in the Matheson Hurdle (at the Leopardstown Christmas Festival) to keep all options open, but there’s the four-year-old hurdle at Limerick (over Christmas) as well,” said Elliott.

“The day he got beat at Fairyhouse a lot of good judges told me he looked empty in the ring. He didn’t look the horse he did early in the season, but it was a good performance at Naas and he’s a good horse.”

Saint Felicien has only had one run for Elliott since joining the yard from France, but he was an easy winner at Gowran.

“Saint Felicien is a nice horse and he could go to Limerick, but I’d like to split him and Teahupoo up as they are both owned by Robcour,” said Elliott.

“There’s a race at Punchestown, a winners of two over two-miles-three. If we go there and it goes well, we could look at something like the Red Mills (at Gowran) after that.

Elliott already has the favourite for this season’s Triumph Hurdle in Fil Dor, a Grade Three winner at Fairyhouse on Sunday.

“He didn’t do much more than we thought he’d do,” said Elliott.

“He’s a very laid-back through the race, which is a great asset as he doesn’t take much energy out of himself.

“He jumped well and when he needed a big jump at the last he got it. He won snug.

“I’d imagine he’ll be going to Leopardstown now, he’ll have an entry at Chepstow the same week but we’ll probably keep him at home. It’s a great race and one we’ve been lucky in the last few years.

“The one thing I love about him, that was only the third win of his career but he switches off lovely behind the bridle and there’s always plenty in the tank. Davy (Russell) gave him one flick and he won hands and heels.”

American Mike is another Elliott youngster heading an ante-post list, in his case the Weatherbys Champion Bumper, but he will need a new jockey for his next race.

“American Mike will go to Navan for the Listed bumper (December 18), although Jamie Codd getting a five-day suspension on Sunday was a bit of a blow so we’ll have to work out who rides him,” said Elliott.