Elliott works his magic on From Eden 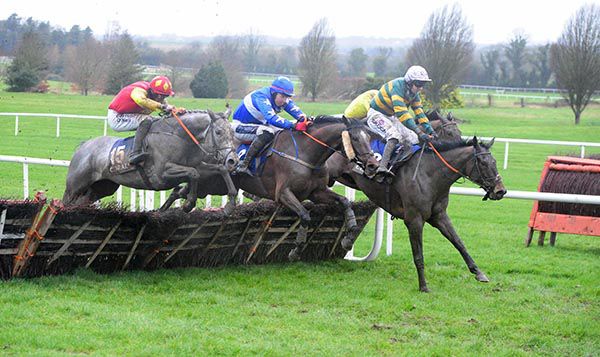 The switch to Gordon Elliott worked the oracle with From Eden who justified strong support in the Coral Free Bets For Lengths Handicap Hurdle at Navan.

The grey gelding won a Fairyhouse maiden hurdle for Val O’Brien nearly two years ago but seemed to lose his way since and as a result dropped down to a mark of 93 on his first start here for the Cullentra House team.

The six-year-old was well-backed overnight and further supported on track from 13/8 into 5/4 favourite, while Hero’s Welcome — 10/1 this morning and backed into 100/30 by off time — was another warm order.

The latter looked set to justify the confidence when leading over the last but weakened quickly on the run-in as From Eden was switched to challenge on the outer.

Jack Kennedy’s mount dug deep on the uphill climb to the line for a half-length verdict over Mount Pelier.

Tara Mill kept on one paced a length and a quarter further back in third, while Maeve’s Choice completed the places in fourth.

Elliott said, “Jack said he was very ring rusty up across the top and he just did what he had to do.

“We were lucky to get the horse. Hamish Macauley, an agent in England, bought him for someone else and they let him down. He had no-one for him, put him to me and I bought him. It was only by accident we got him and a big thanks has to go to him.

“We'll have a look with him now. He's in everywhere and we'll see. I couldn't see the handicapper giving him much because it was a bad race.”