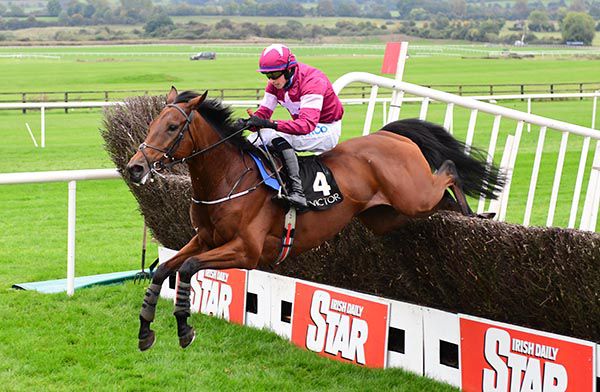 The 5/4 favourite Embittered was a good winner of the Extra Places Everyday At BetVictor Novice Steeplechase under Bryan Cooper.

The Fame And Glory gelding, meeting his Roscommon conqueror Exit Poll on 7lb better terms in this Grade 3, took the lead from that rival at the end of the back straight and had matters under control from that point.

Eventual third Exit Poll had no more to offer turning for home and it was Roscommon fourth Hurricane Georgie who gave chase to the winner from two out.

Cooper didn’t have to get overly serious to guide his mount to a two and three quarter length victory from Hurricane Georgie (22/1) in second.

It was a second win from ten chase starts for the 7-year-old who fell when favourite for the Grand Annual at Cheltenham in March.

Brendan Powell, assistant to winning trainer Joseph O’Brien, said: “It was probably a bit sharp for him the last day (at Roscommon) and they got him out of his comfort zone halfway around. The extra few furlongs today suited him.

“He jumped lovely today and I thought he won the race by taking the other horse on a long way out.

“He tends to jump a bit left at times but he jumped pretty straight today. Bryan gave him a lovely ride.”