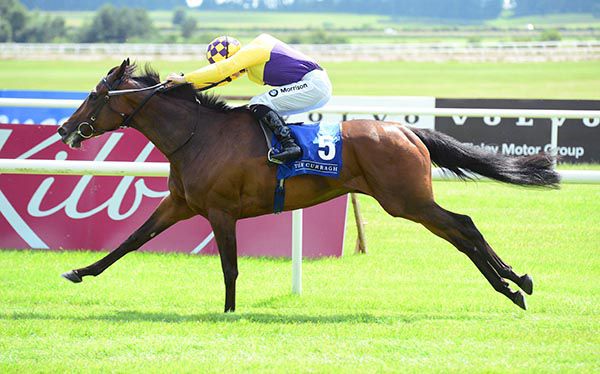 Joseph O’Brien completed a quick 11/1 double at the Curragh as Emphatic Answer made virtually all in the Irish Stallion Farms EBF Fillies Handicap.

The field for this mile event was reduced to five after Flagged (temperature) and New Hill (ground) were taken out and the task was eased further when Mia Mento and Sindhia both lost considerable ground at the start.

Shane Crosse’s mount had something of an uncontested lead and the 11/4 chance found plenty under pressure inside the final furlong to beat 13/8 favourite Celtic Crown by two and a half lengths.

O’Brien, also successful in the previous fillies maiden with I Siyou Baby, said “She won well in Killarney the last day and had a little holdup after that. She won well today.

“Her form previously was on softer but we were always hopeful that being a No Nay Never she would have no problem with that ground and she really enjoyed it.

“Shane said there wasn’t much pace and he might get to make it so I said that was fine. We got to control the race and it has been favouring front runners all day.”