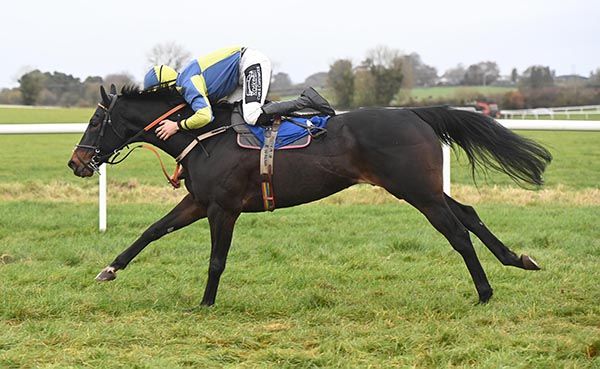 Peace Party (11/2) survived a blunder at the last to register his second win of the campaign in the concluding Boomerang Shavings & Horse & Country Store Handicap Hurdle.

The 9-year-old, who got off the mark at Gowran last month, chased the leaders before hitting the front travelling well at the second-last. He quickly asserted and was clear when getting the last all wrong and almost unseating Eoin Walsh. The 5lb claimer sat tight, though, and his mount regained his composure to readily defeat the 9/4 favourite Lesssaidthebetter by eight lengths.

Walsh was completing a double which paid a little more than 122/1 following his earlier success on Ciankyle.

Winning trainer Des McDonogh said: "That was great and he had a good, long-legged jockey who sat him well at the last. He clipped the top bar and got in a hole at the back of it, I believe, and he was very close to coming off.

"He ran well in Limerick (second to Lake Chad last week) and here previously and loved the better ground. We'll keep tipping away as long as it's not heavy ground."