Evening 'a tonic' for recuperating Harrington 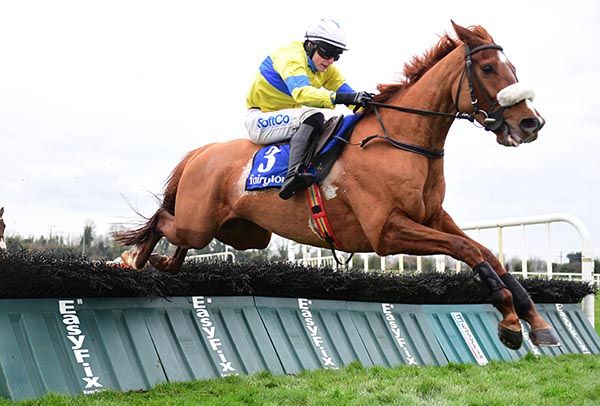 The Jessica Harrington-trained Autumn Evening skipped clear after the second last to seal victory in the conditions hurdle at Fairyhouse this afternoon.

Five went to post in the two-miler and they were closely bunched turning for home.

Sean O'Keeffe asked Autumn Evening to challenge before the penultimate flight and the Tamayuz gelding jumped on at the hurdle.

He soon went a few lengths clear of his pursuers and galloped on strongly in the closing stages to post a two-and-three-quarter length win over 9/4 favourite Indigo Breeze.

The 7/2 winner had finished eighth in a very competitive handicap contest at the track back in November and was recording his third victory over timber.

Kate Harrington said afterwards:- “That was a very good performance and it’s good to see him come back.

“He had a fall in Naas and it knocked his confidence a bit. He was novicey in the big handicap here last time.

“He was going to run in Limerick over Christmas but the ground was too heavy and this was a lovely opportunity for him.

“He’ll probably go for the two-mile (Ladbrokes) handicap at the Dublin Racing Festival.

“He’s a lovely big horse and is really only filling his frame now.

“That’s a nice tonic for mum as she had a knee replacement last Thursday.”

The winner was introduced at 20/1 for the County Hurdle with Paddy Power.