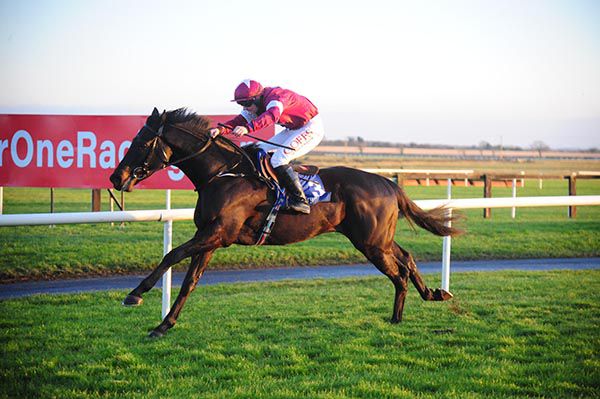 Eric Bloodaxe (7s into 11/2) scored on debut to bring up a Joseph O’Brien treble at Fairyhouse in the Royalhousedraw.com (Pro/Am) INH Flat Race.

Very professional on debut, the successful Gigginstown House Stud-owned Saint Des Saints gelding went for his race down the inner in the straight under Tom Hamilton.

Odds-on favourite Ferny Hollow was too keen through the race and he edged away to his left at the business end.

Eric Bloodaxe ended up gaining the day by two and a half lengths, to add to the earlier gains of his stable companions Cerberus and Fakir D’Oudairies.

Gigginstown also had the third, fourth and fifth in this bumper, Ragnar Lodbrok, Favori De Champdou and Flanking Maneuver.

“He’d been working nicely at home but obviously in a bumper like that first time out it’s hard to be confident but we were hoping he’d run a good race," said O'Brien.

“To see him win like that first time out having never run in a point-to-point is very impressive.

“He’s a very nice horse and we’ll look at Leopardstown either at Christmas or in February. He’s a good prospect.”

For the Cheltenham Bumper Betfair introduced Eric Bloodaxe at 14/1.

The Stewards fined P.G. Fahey, trainer, €350 for lodging a passport in respect of Somme Soldier, in which the vaccinations did not conform with the provisions of Rule 91.

The Stewards ordered the withdrawal of Somme Soldier in accordance with the provisions of Rule 90.

Having viewed the recording of the race and considered the evidence, the Stewards were satisfied that any interference caused was accidental and therefore took no further action.

The Stewards interviewed O.R. Brown, rider of Fun Light (FR), concerning his use of the whip in the closing stages of this race.

Having viewed a recording of the race and considered the evidence, the Stewards were satisfied that O.R. Brown was in breach of Regulation 10.3(g)(frequency) and having considered his record they cautioned him on this occasion.

Delphi has the answers in Leger trial

Aidan O'Brien's Delphi brought up his four-timer with a game display off the front in the mile and six Irish St Leger Trial at the Curragh.

Frenetic all speed in the Curragh

Speedball Frenetic bounced back to winning form in the Listed five-furlong race at the Curragh.

Charterhouse opened his account at the third attempt when justifying odds-on support in the Irish EBF Median Sires Series Maiden at the Curragh.