Fairymount Boy follows up for Hourigan 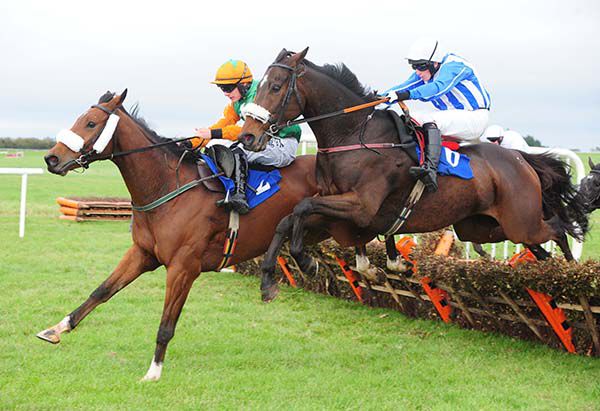 Fairymount Boy got off the mark at the 21st attempt at Gowran Park last month and further rewarded his connections patience when following up in fine style in division two of the Templemore Handicap Hurdle at Thurles.

The 6/1 chance was confidently ridden by Barry John Foley, who waited until after the last before letting his mount stride on.

The 4/1 favourite West Light kept on another three quarters of a length back in third, with top-weight Tintown Robin just a neck further away in fourth.

Hourigan said, "I kind of always knew it, but we've found the key to him now by leaving it as late as possible with him. Things weren't going to plan with him and I must mention the kissing spines that he had.

"He ran really well once here and I thought he was a certainty the next day under Jack Kennedy but didn't run so well. Donnacha Houlihan found a problem with kissing spines and the operation has made a big difference to him. It was the last thing I thought would be wrong with him as he had always been a good jumper and good mover.

"Pat Hayes and his nephew Kevin White, who helps me in the yard, own him and I'm delighted for them. I'm nearly entitled to come back here in two weeks time for another 0-95 handicap as I can't imagine the handicapper will push me outside the mark."