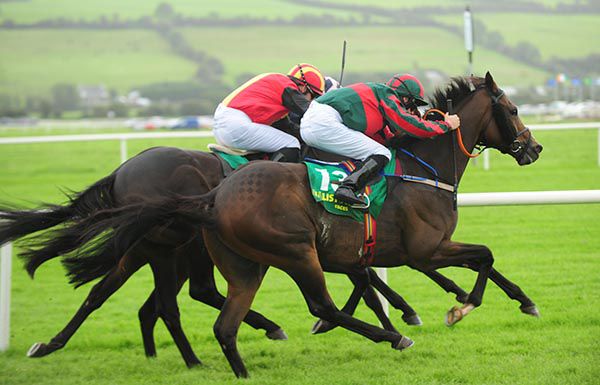 Last year's Laytown winner Cyrus Dallin gave the beach a skip and instead was on the mark at Listowel today in the Brandon Hotel Handicap, in a race marred by the injury to favourite Angel's Amy.

Cyrus Dallin today scored a length and a half success under a well timed challenge from jockey Joe Doyle.

Heavily supported even money favourite Angel's Amy was an easy winner at the Festival meeting on Monday but unfortunately was pulled up early-on today with what proved a fatal injury.

Winning trainer Denis Hogan was at Laytown and following the race, winning jockey Doyle reported “he’s done it really nicely, and has been in great form his last couple of runs. He loves that ground.

“We thought the draw would be a big problem but he has plenty of early speed and we got a good position. He put the race to bed really nicely.

“I’m very fortunate to be with Denis; he gave me my first winner seven years ago, and to come back and ride a winner for him at Galway, at the Curragh and at Listowel is brilliant. We work so hard in that yard and it’s nice to get the winners on these days.

“The horses are in flying form and that’s due to the hard work of all the lads at home. I’m lucky I get to ride them in races.”

Cyrus Dallon, a son of Roderic O'Connor, won at last year's Laytown fixture, which also takes place today, when he was the subject of claims from no less than 20 trainers, with a price-tag of just E5,000.

Winning claimants trainer Keith Clarke and owner James McAuley never raced the gelding as he subsequently rejoined the winning Westerners Syndicate, before then returning to trainer Hogan this year.