Felix Desjy starts out over hurdles in Ballybrit 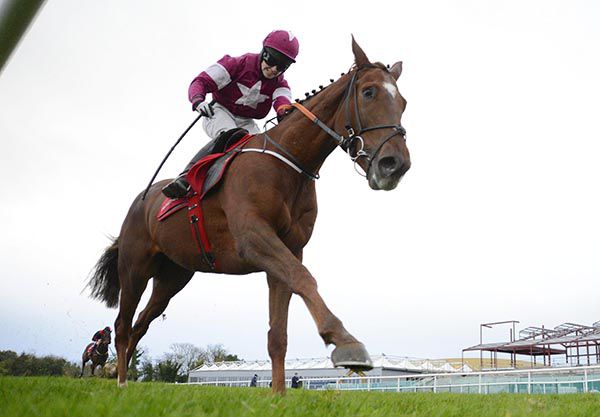 An impressive winner on his sole start in the point-to-point field, the Gigginstown House Stud-owned gelding won National Hunt Flat races at Punchestown and Down Royal to earn himself a shot at the Champion Bumper at the Cheltenham Festival.

Gordon Elliott’s charge finished a creditable sixth at Prestbury Park and was fifth in the corresponding race at the Punchestown Festival.

The five-year-old makes his first start since in the Connolly’s RED MILLS Irish EBF Auction Maiden Hurdle and is likely to be a warm order.

Speaking in a stable tour on www.attheraces.com, Elliott said: “He was a good horse in bumpers last season.

“He can take a grip in his races, but I think he’ll stay well. Hopefully hurdles will help settle him down a bit.”

Elliott’s Empire Burleque has similar profile ahead of the Corrib Oil Maiden Hurdle later on the card.

He won a point-to-point and a Fairyhouse bumper before finishing tailed off in a Grade Two bumper at the Dublin Racing Festival at Leopardstown in February. He makes his first start since on Saturday.

The Cullentra handler also has a major contender for the Sanserv Rated Novice Chase in Boot Camp, who made a smart start to his career over fences at Limerick a fortnight ago.

He has more on his plate this weekend, however, with Abbey Magic on a hat-trick for Henry de Bromhead and Rachael Blackmore following wins at Kilbeggan and Navan.

The most valuable race of the day is the 27,000 euro Faber Audiovisuals Handicap Hurdle.

The weights are headed by the Charlies Byres-trained Off You Go, who has been off the track since winning a valuable prize at the aforementioned Dublin Racing Festival almost nine months ago.

He is one of two contenders for owner JP McManus along with Hearts Are Trumps, who is likely to prove hard to beat despite being handed an 11lb hike for winning over the course and distance last time out.